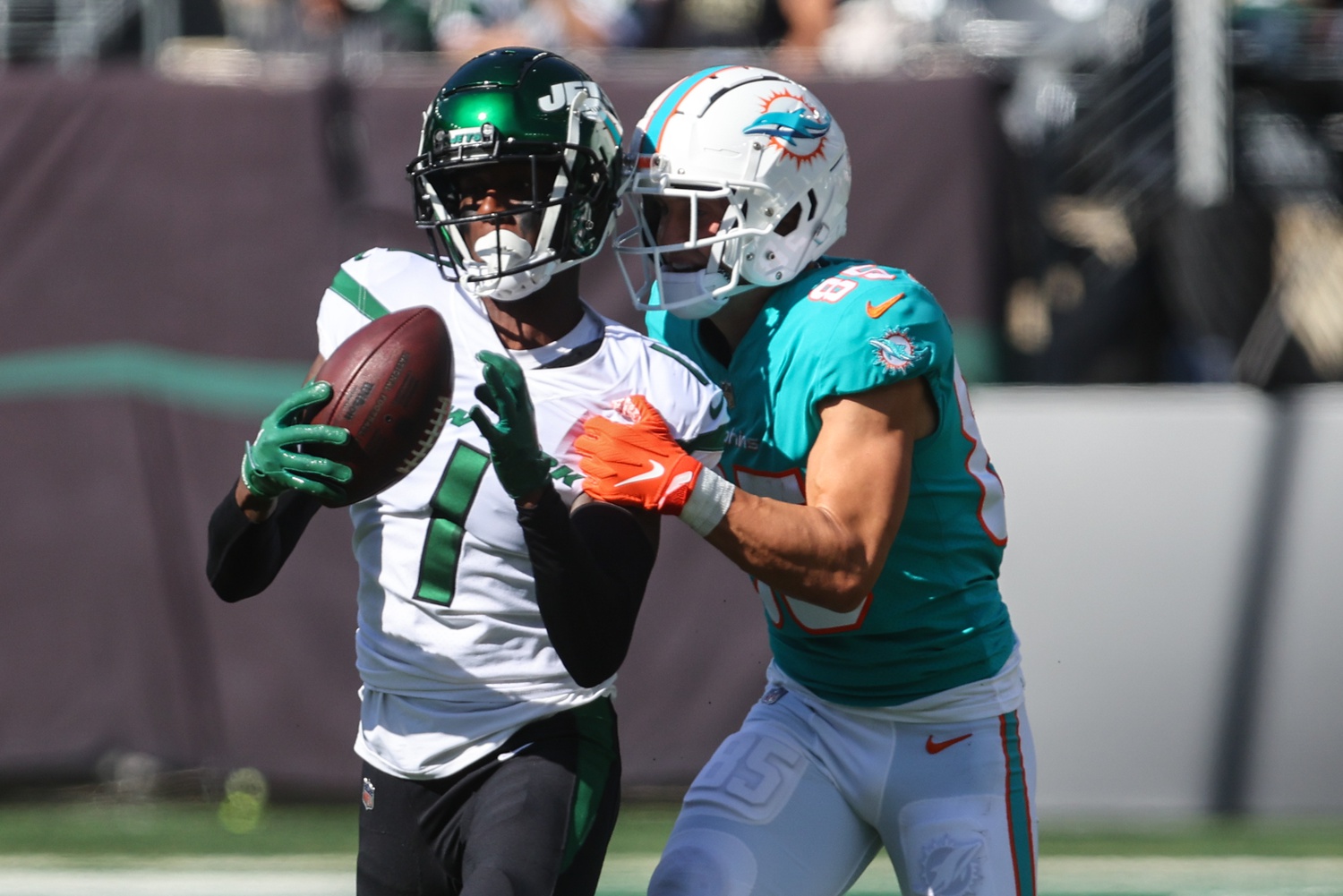 Ahmad Gardner May Already Be One Of NFL’s Best CBs

New York Jets rookie cornerback Ahmad Gardner has played in five games in his professional career so far. He already might be one of the NFL’s best defensive backs.

Gardner has been making plays all over the field in his first five weeks of NFL action. Though he only recorded his first interception this past weekend in the Jets’ win over the Miami Dolphins, that doesn’t mean he hasn’t been a massive defensive contributor in other ways.

Gardner has been locking down receivers in man coverage and also improving in his zone defense, allowing just 154 yards in coverage through five games. For comparison, Derek Stingley Jr., the cornerback selected one pick before Gardner in the 2022 NFL Draft, has allowed 350 yards in coverage. Trevon Diggs, a young cornerback that many already tab as among the best in the NFL, has given up 341 yards and allowed more than 180 against the Los Angeles Rams this weekend. Even if you take out that recent poor performance in coverage, Gardner still has allowed less receiving production.

It’s not like the reason for Gardner’s lack of receiving yards allowed has to do with game scripts for opposing teams. The Jets have won three games! Aside from the unbelievable late-game comeback against the Cleveland Browns, teams have had to pass the ball against New York.

Gardner is just not allowing very many completions with his tight coverage and six pass break-ups through five games tied for fourth in the NFL. Those pass break-ups have come against some of the best receivers too, with a couple against the Bengals’ top two receivers in Ja’Marr Chase and Tee Higgins.

This angle of Sauce Gardner’s PBU on Ja’Marr Chase 🔥 (via @iamSauceGardner) pic.twitter.com/ANP3IyX6c3

Jets rookie Sauce Gardner has broken up multiple high leverage passes today. Shows the ball skills off on this third down PBU. pic.twitter.com/2edVc7DkKu

He broke up a potential touchdown pass to Ravens tight end Mark Andrews.

Look at Sauce Gardner’s awareness to detect Mark Andrews and then his recovery speed and timing to break this ball up… pic.twitter.com/unbPU8ROEP

Gardner hasn’t just been feasting against some random guys. He’s competing with (and winning against!) the best of the best. In return, teams are learning quickly that they need to respect the rookie cornerback across from them.

The pass break-ups are great, but what’s greater is getting the ball back for your offense with interceptions. And just days after Gardner remarked that he wanted to get an interception of his own as one of few Jets defensive backs without one this year, he recorded his first career pick against the Dolphins on Sunday.

Even though the throw was affected by defensive end John Franklin-Myers getting a hand on Miami quarterback Skylar Thompson, that’s an impressive play by Gardner, coming up from behind receiver River Cracraft and snatching the ball right in front of him. It becomes even more impressive when you can see what Gardner does away from what the broadcast shows.

Looking at the all-22, Gardner’s change of direction skills really pop. He starts off the play getting extra depth with Cracraft running vertical behind him on the outside. As soon as Thompson’s hands break, the rookie corner sinks his hips and redirects his body toward the sideline with incredible quickness as Cracraft begins to break for the sideline. Without the ability to change direction as fast as he did, Gardner wouldn’t have been able to make a play on the ball, let alone intercept it. To do it that quickly, and at his 6-foot-3 stature, is seriously impressive and something that will allow him to keep making great plays this year and beyond.

Sauce Gardner’s 1st Career INT. Great pressure by JFM to disrupt the throw. Sauce has great recovery and awareness to jump this throw. First of many… pic.twitter.com/HMWKgfGQ7k

Gardner truly is a special talent at the cornerback position. He’s only a rookie and he’s only played in five games, so it might be easy to overreact to the ball production and numbers he has in a small sample size. But looking closer at who he’s done it against and how he does it, it’s clear that Gardner’s talent and skill set is built for long-term success at the NFL level.

If he continues to play the way he’s played in the first five weeks of the season, he could run away with the Defensive Rookie of the Year award and earn himself a Pro Bowl nod as well. And at this rate, it won’t be long before we have to start putting the rookie in our conversation about elite NFL cornerbacks.