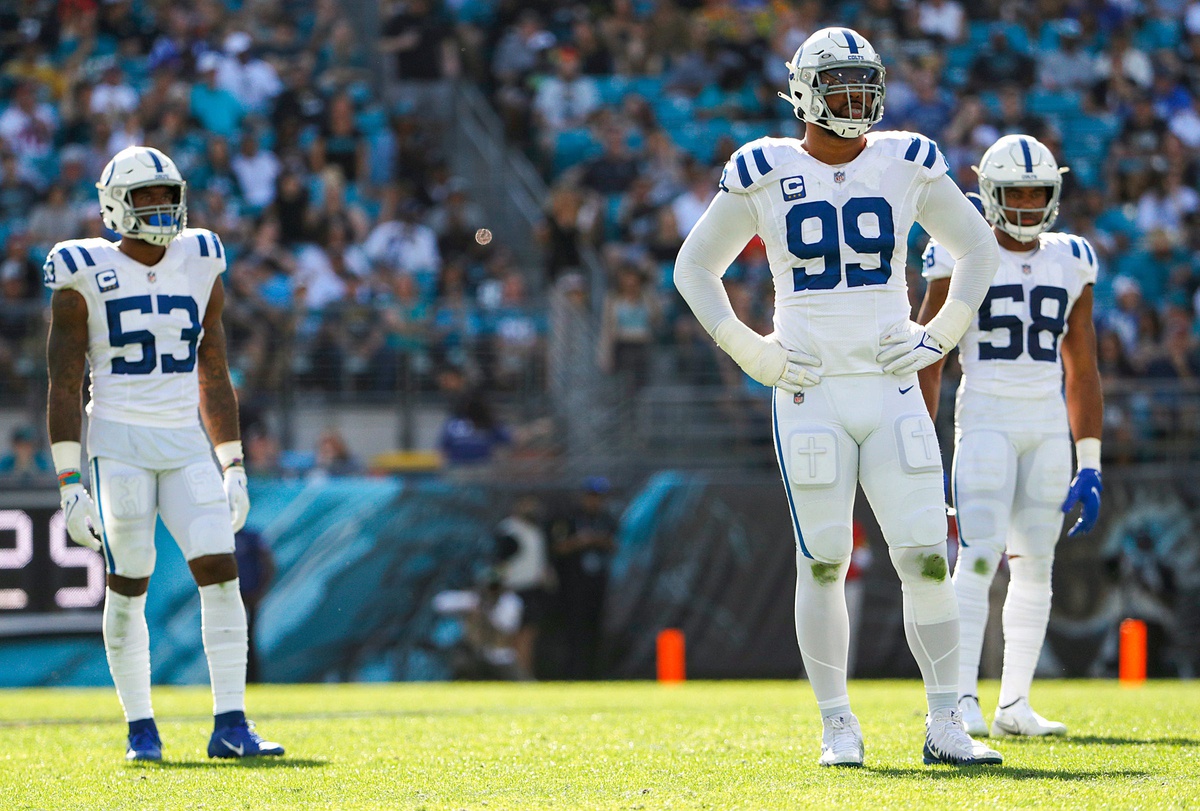 The AFC South hasn’t been one of the league’s more appetizing divisions as of late. The division sent just one team to the postseason last year via the conference-winning one-seed Tennessee Titans, who were upset in their first playoff game by the Cincinnati Bengals in Nashville. The Indianapolis Colts suffered a disappointing second-half collapse, and the Jacksonville Jaguars and Houston Texans have deservingly been the butt of many NFL-related jokes in recent years.

This campaign could be different. An improved Colts roster, headlined by new starting quarterback Matt Ryan, should threaten the Titans’ chances of capturing their third consecutive division title. While the Jaguars and Texans aren’t likely to pose a serious threat within the division, both franchises should field improved teams this season. The AFC South should be considerably more competitive moving forward.

In this exercise, we are analyzing the state of each roster in the AFC South while turning a blind eye to each team’s starting signal-caller. The quartet of Ryan (IND), Ryan Tannehill (TEN), Trevor Lawrence (JAX), and Davis Mills (HOU) have been placed to the side as we evaluate the remaining players on offense and defense plus the potential success of each unit and how it relates to each club’s success as a whole. From top to bottom, here is how the AFC South shakes out.

Following a 12-win regular-season campaign that ended in postseason disappointment, the Titans have experienced an abundance of change this offseason, particularly on offense. A.J. Brown was traded to the Philadelphia Eagles following a contract dispute. Julio Jones was released following an injury-plagued debut season in Tennessee. Veteran acquisitions Robert Woods and Austin Hooper are expected to pick up the slack, but questions regarding Tennessee’s overall offensive effectiveness remain in question.

The Titans are expected to remain a run-heavy offense with the return of superstar ball carrier Derrick Henry back to full health. Taylor Lewan and Ben Jones are high-level mainstays on the offensive line, but concerns at left guard and right tackle (first-year starter Dillon Radunz) are present. Malik Willis and Treylon Burks are the future, but neither player is expected to make a sizable impact in 2022.

The offense may be littered with questions, but the defense has very few unknowns in comparison. Jeffery Simmons has developed into a dominant interior defensive lineman who’s fully capable of producing 10-plus sacks annually. Harold Landry, Bud Dupree, and Denico Autry help round out one of the most productive front fours in all of football. Kevin Byard is one of the league’s premier ball-hawking safeties, and Amani Hooker makes for an interchangeable back-end partner. Starting inside linebackers David Long Jr. and Zach Cunningham showcased an impressive partnership down the stretch. Sophomore cornerback Caleb Farley is a prime breakout candidate who should thrive opposite last year’s breakout, Kristian Fulton. The Titans are a top-10 defense.

Indianapolis’ offense revolves around breakout running back Jonathan Taylor, who led the league in both rushing yards (1,811) and touchdowns (18) last season. Frank Reich’s offense will continue to center around the league’s reigning rushing champion. Michael Pittman Jr. enjoyed his first 1,000-yard campaign in 2021 and Indianapolis’ passing game will require him to do the heavy lifting once again. Colts General Manager Chris Ballard has struggled to find an appropriate running mate for Pittman and they’re hoping rookie second-round selection Alec Pierce becomes that player.

While depth at both receiver and tight end leaves plenty to be desired (watch out for rookie tight end Jelani Woods, however), the offensive line remains one of the league’s most dominant units. Quenton Nelson is arguably the best interior blocker in the league. The likes of Ryan Kelly, Braden Smith, and Danny Pinter are high-level starters themselves.

Veteran defensive coordinator Gus Bradley has inherited a talented unit. DeForest Buckner and Darius Leonard are the centerpieces of this defense—although injuries are beginning to catch up to Leonard, he remains an elite inside linebacker. Kwity Paye and Dayo Odeyingbo are young, ascending pass rushers that should both enjoy fruitful sophomore campaigns.

Several impressive veterans were acquired in the offseason as well. Five-time Pro Bowler Stephon Gilmore signed a two-year contract that contains $14 million in guaranteed money. Gilmore should help eliminate one side of the field. Gilmore replaces Rock Ya-Sin, who was traded for one of Bradley’s favorite players, Yannick Ngakoue. Nickel corner Kenny Moore II is one of the best at his designated position, and his ongoing contract dispute should be settled before September arrives.

The Colts should qualify for the postseason via an AFC South title or a wild-card spot.

Jacksonville’s roster received several much-needed upgrades this offseason via free agency, particularly on the offensive side of the ball. Christian Kirk and Zay Jones will provide Lawrence with reliability at receiver. The returning Travis Etienne, whose entire rookie season was lost due to injury, should be a dangerous dual-threat playmaker in coach Doug Pederson’s offense. New tight end Evan Engram is a perfect fit for Pederson’s field-stretching offense.

The offensive line should be better than it was a year ago too. Backing up the Brinks trunk for five-time Pro Bowl guard Brandon Scherff all but guarantees improvement. Rookie Luke Fortner is expected to start at center with Cam Robinson and Jawaan Taylor returning at left and right tackle, respectively. Jacksonville’s offense is beginning to stack talent in an appropriate manner.

An undrafted-free-agent-story-for-the-ages, former Los Angeles Rams cornerback Darious Williams immediately becomes Jacksonville’s No. 1 cornerback after signing a three-year contract worth $30 million. Returning sack-artist Josh Allen is the type of talent who can flirt with double-digit sacks annually. Folorunso Fatukasi makes Jacksonville’s run defense a tougher matchup up the middle, a must when competing against Henry and Taylor within the division.

Jacksonville probably isn’t ready to compete with the Titans or Colts in the AFC South just yet, but they’re well on their way.

The Texans remain in the early stages of their rebuild. Brandin Cooks is a dynamic pass-catcher, but the Texans’ offense lacks proven playmakers otherwise. Nico Collins and John Metchie III both carry the potential to develop into starting-caliber receivers, but the jury remains out on their effectiveness. 2022 also qualifies as a big season for sophomore tight end Brevin Jordan, who recorded just 20 receptions for 178 receiving yards as a rookie.

Rookie ball-carrier Dameon Pierce may eventually take the reins from Marlon Mack and Rex Burkhead in the backfield. First-round pick Kenyon Green is a building block to join Laremy Tunsil on the offensive line, but questions are still present at the three remaining offensive line positions. The Texans’ offense remains a work in progress.

Houston’s defense is similarly built with young, ascending defenders that have yet to truly prove themselves consistently. Jonathan Greenard was one of the league’s most underrated defenders on a bad team last season, accounting for a career-high 8.0 sacks. Former Seattle Seahawk Rasheem Green was an underrated bargain-bin signing in free agency. Ross Blacklock is being counted on to take a positive step forward in 2022. Maliek Collins is a shrewd defender that brings a steadying presence to the interior of Houston’s defense.

The secondary features an intriguing mixture of youth and veterans. Derek Stingley Jr. immediately steps into a starring role on the outside of Houston’s defense following general manager Nick Caserio’s decision to draft Stingley with the No. 3 overall selection in the 2022 NFL Draft. Fellow draft pick Jalen Pitre helps Stingley spearhead a new era on the back end of Houston’s defense. Re-signing cornerback Desmond King, who arguably enjoyed his most fruitful campaign in 2021, was a wise decision. Veteran cornerback Steven Nelson helps round out what could be an underrated secondary.