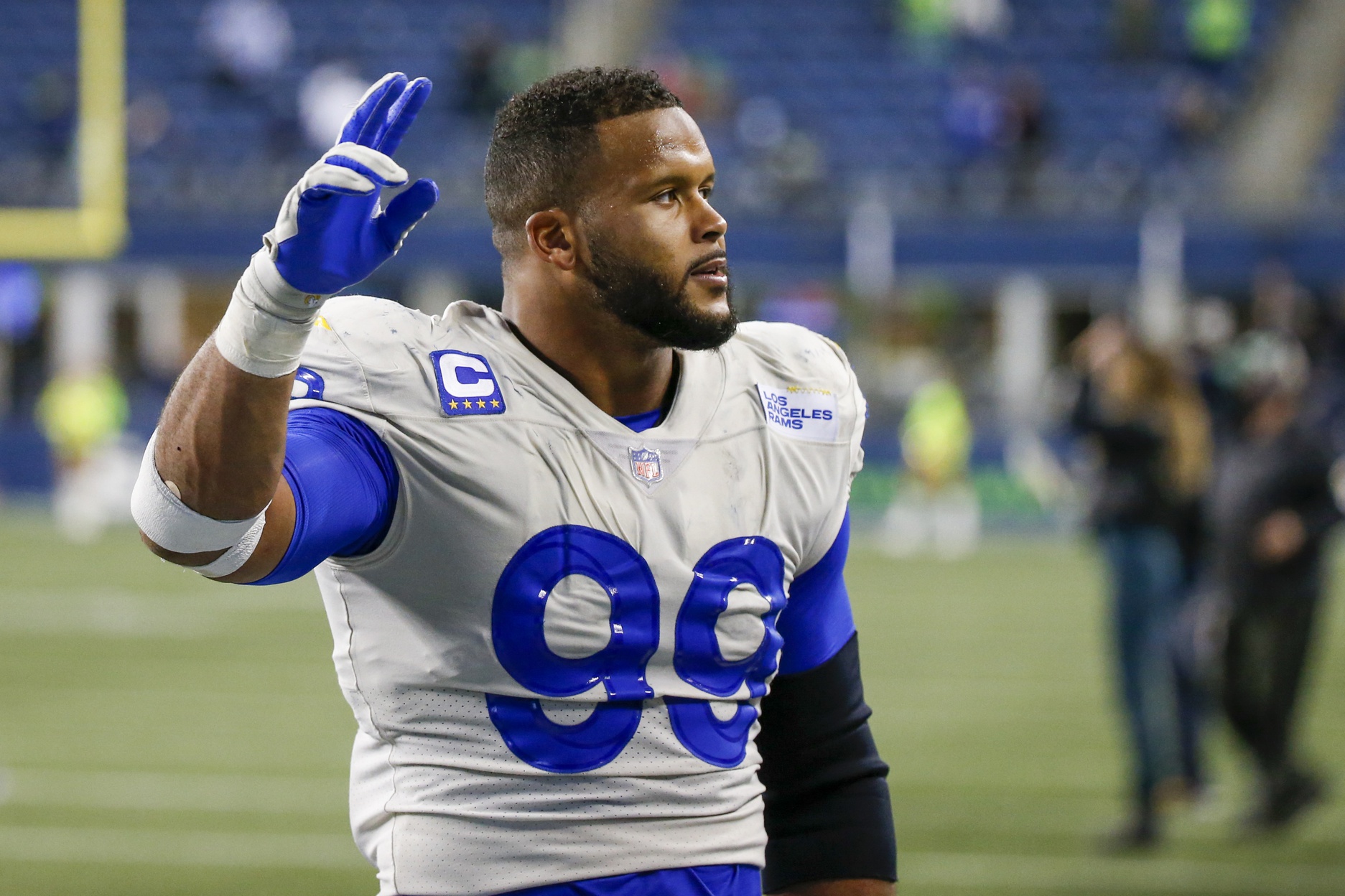 Los Angeles Rams superstar defensive tackle Aaron Donald was allegedly considering retirement leading up to the Rams’ Super Bowl LVI triumph over the Cincinnati Bengals. NBC analyst and former player Rodney Harrison revealed Donald’s possible retirement plans just minutes before kickoff in what turned out to be a rather controversial occurrence. Donald ignored the noise by helping Los Angeles to victory by recording two sacks and three quarterback hits, including a game-sealing pressure on 4th-and-1 with less than a minute remaining that resulted in an incompletion and turnover on downs.

Despite his historic individual performance, retirement talk remained present throughout the early portion of the offseason. It had cooled down in recent months, but a recent appearance on the popular ‘I Am Athlete‘ podcast has breathed newfound life into Donald’s retirement discussion.

Donald admitted to potentially being “at peace” without football while discussing his future with former NFL great and podcast host Brandon Marshall. Despite Donald discussing life without football, it’s difficult to envision him retiring as the calendar prepares to flip to June and mandatory minicamp marks its arrival. Rams fans should feel comfortable safely disregarding any retirement chatter that may come out of Donald’s mouth down the stretch.

Donald’s comments included remarks about his contract and it’s possible he used the platform to create an increased sense of urgency regarding his situation. Donald signed a six-year, $135 million contract extension with $87 million in guarantees following a holdout in August of 2018. It made Donald the highest-paid defensive player in NFL history, but contracts quickly become outdated in a league that features a rising salary cap. Donald’s current contract carries him through the 2024 campaign (his age-33 season), so an extension that tacks legitimate additional years onto the existing contract is unlikely. A repackaging of the current three-year agreement qualifies as far more likely. Rams General Manager Les Snead may prefer to add void years to the end of the contract in order to spread out the cap hit, but Donald is unlikely to commit to playing well into his mid-30s.

The three-time Defensive Player of the Year is set to currently earn approximately $22.5 million throughout the 2022 campaign. For comparative purposes, Joey Bosa, Khalil Mack, Maxx Crosby, and Myles Garrett, who all signed extensions with their current clubs more recently than Donald did, are set to earn more in 2022. Donald is however unlikely to compare his contract to those players though. Pittsburgh’s T.J. Watt is the league’s highest-paid defensive player. His recent four-year extension pays him an annual average of $28 million and Donald will undeniably look to approach and potentially surpass that figure given his track record. It’s a figure ($28 million) that’s become the new benchmark for an elite defensive difference-maker such as Donald.

Donald, his representation, and the Rams are all aware that his current contract deserves amending. For his part, Donald recently signed a shiny new marketing deal with Kanye West’s newly-launched Donda Sports. It’s an avenue that’s expected to help Donald discover financial opportunities outside of football, all while recognizing a new lucrative contract from the Rams should arrive shortly.

Donald fully understands the importance of his legacy. Far too many athletes overstay their welcome while doing irreparable damage to the reputations they’ve furiously worked to build and maintain for themselves. Father time eventually marks a merciless arrival, but Donald remains the most effective defensive playmaker in the league today and Rams fans should expect him to return to Los Angeles in 2022. It may include a new contract and a sizable bump in pay, but barring an unforeseen outcome, Donald will be a Ram.