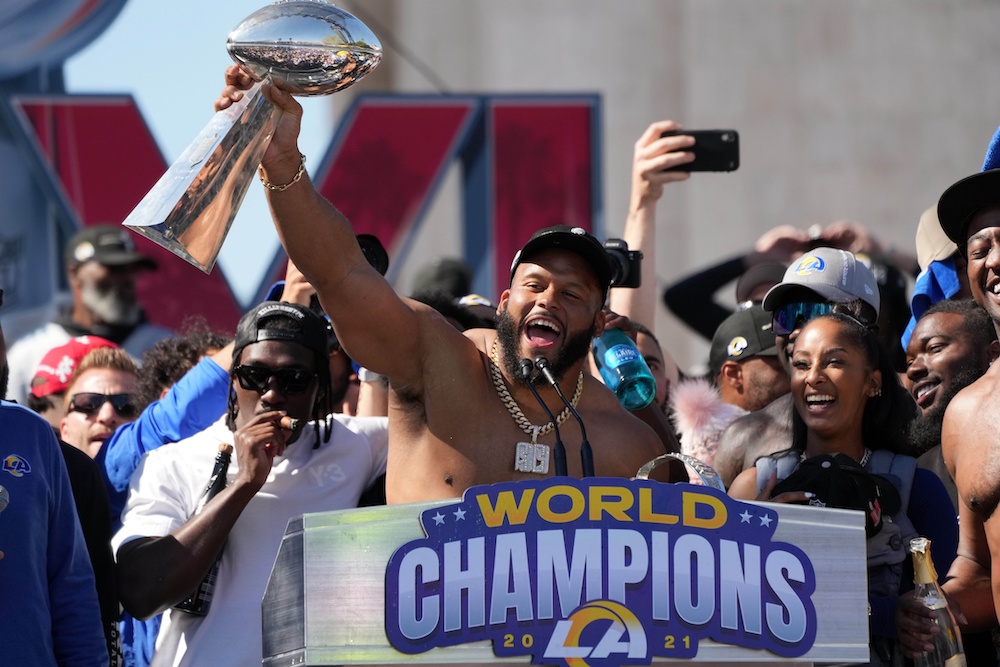 Why Aaron Donald is Best Defensive Player Ever

Before Super Bowl LVI, rumors were swirling of defensive tackle Aaron Donald potential retirement should the Los Angeles Rams win the big game. But after Donald’s celebration at the Super Bowl parade was capped off with a “why not” to run-it back chants, it seemed like the mystery about his return was over.

Then Donald made an appearance on Brandon Marshall’s I Am Athlete podcast and the floodgates were reopened. When discussing his and the Rams’ contract discussions, Donald said, “​​We’ve got to handle the business side of things, and if that wasn’t to get handled then, you know, it is what it is type of situation. I’ll be fine regardless.”

It is understandable why Donald is at peace walking away from the game. After being selected with the 13th pick back in 2014, he earned Defensive Rookie of the Year honors and has not looked back since. In his eight-year career, Donald has won Defensive Player of the Year three times, been named First-Team All-Pro seven times and made the Pro Bowl each year of his career. On his way to his first Super Bowl appearance, he earned his second DPOY while racking up 20.5 sacks, good enough to get him to the eighth-most in a season all-time.

Though his numbers don’t appear to stack up with the likes of Reggie White, Bruce Smith and Julius Peppers on paper, there is more to it than meets the eye. Donald’s 98.0 career sacks are impressive, but when compared to Smith’s 200.0, those numbers don’t appear to be on the same level until you realize that Donald has only played in 127 games. Every other player within the top ten all-time sack list has appeared in at least 215 games.

Beyond Donald’s numbers, his gravity as an interior defensive lineman is unheard of. As Donald has destroyed quarterbacks, he routinely has two or three offensive linemen attached to his jersey. And he isn’t the only one reaping the benefits. Whether it be Robert Quinn, Leonard Floyd or Dante Fowler Jr, they have all benefited during their times with the Rams because of Donald’s impact on offenses.

If Donald were to walk away today, he would undoubtedly be one of the best defensive players of all time. But I’m here to tell you, he isn’t just “one of” – he is the best we have ever seen. It’s unlikely we will ever see a player as dominant as him ever again so let’s just hope that we will be able to see him for one more season.