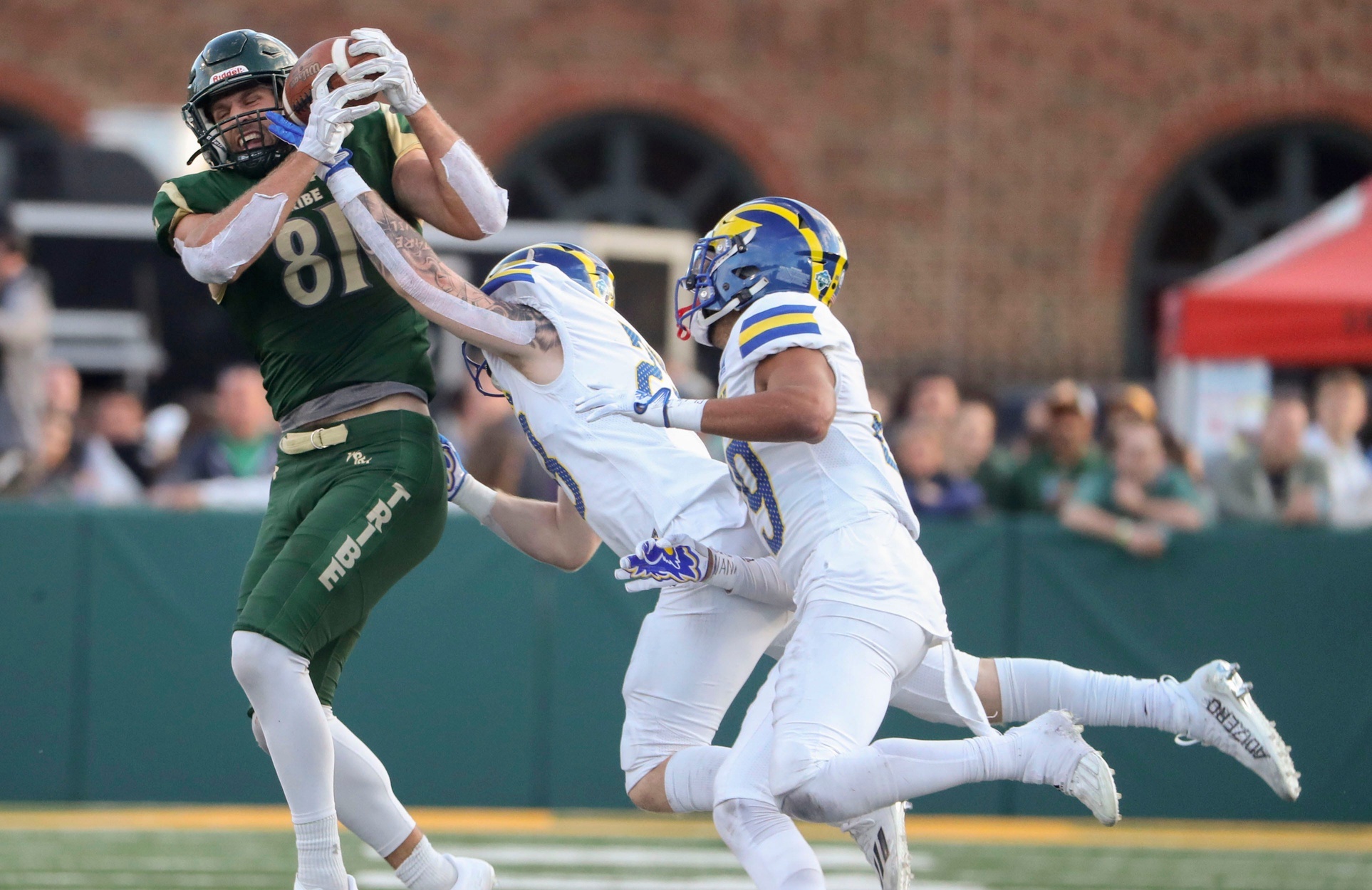 With 2023 officially underway, the countdown to this year’s NFL draft has officially begun. The premier event of the offseason cycle, while our evaluations are well underway at TDN with hundreds of reports already up in our database, there remains a group of athletes that deserve more attention that has received a good amount of buzz within league circles—names that could go as high as in the top 40, and some guys you’ve most likely never heard of

Here is a list of underrated prospects whose names have come up in conversations with NFL draft evaluators.

One of college football’s most productive ball carriers the last two seasons at Pitt, Abanikanda could sneakily work his way to the top of the second round. A track star in high school who ran a verified 4.33 40-yard dash this spring, he may tease with 4.2 and light the combine on fire.

A downhill thumper as well with the wiggle to squeeze through the trenches only to quickly kick into fifth gear, he could be a heck of a complementary talent for a team in need of fresh legs in the backfield. His footwork and one-cut ability are fantastic.

All 32 teams have made the trip down to Williamsburg this fall to scout the big 6-foot-6 target, and rightly so. A physical blocker whose well-rounded skill set would be a nice addition to an offense that values the tight end spot, his sneaky athleticism has drawn the attention of scouts this fall.

How he tests will hold massive weight toward his NFL draft stock, but his elite size pops off the screen. He looks the part of modern-day ‘Y’ TE and is a member of a long line of family members that have played football at a high level—his great-grandfather played for the early-NFL Orange Tornados back in the 1920s.

A four-year member of the Orange, Jones is built in the mold of a hybrid linebacker that can move like a safety. At 225 pounds, he can play heavier if need be, but watching him fly around the Carrier Dome for four seasons was a treat.

He’s hard to miss on tape with his amount of arm bands stretched across each appendage, but his play does most of the talking itself. He’s got smooth feet, quick hips, never approaches contact softly, and is an above-average blitzer. He’s someone that will boost depth at the LB position for a team and provide value on special teams from day one.

Teammate Andrei Iosivas has received all the spotlight this fall, but teams have grown fond of Classi’s game. He’s as sure-handed a player as you’ll find in the college game. He’s got experience playing outside at X, inside in the slot, and looks the part at 6-foot and 190 pounds. He won’t blow anyway when it comes time to test, but aligning opposite and limiting him for a full 60 minutes is a tall task. There’s a lot to like about his game.

At 6-foot-5 and 185 pounds, it doesn’t take long for Smith to draw attention. For a Bulldogs program that has produced the likes of Javon Hargrave, Shaquille Leonard, and Decobie Durant over the last handful of years, Davis could be next in line.

He was unguardable this fall, amassing 934 yards and 11 touchdowns. A glider in space who eats up ground on opposing corners, he has no issue playing within the shallow areas of the offense or rising above corners if need be.

There were four HBCU players taken in the 2022 NFL Draff—he could be one of many drafted this spring.

He remains a tweener at 270 pounds, but his athleticism at the weight he carries is impressive. He has no issue aligning at 5-tech and rushing the passer, and losing a few pounds to live on the outside at the next level is intriguing instead of going the other way. Experience inside is a plus in countering the run, but allowing Ferguson to work in space will allow him to make an immediate impact.

He plays with his hair on fire, and there are multiple instances of him chasing down running backs and wide receivers in the flat areas of the defense. He recorded multiple pressures in all but one game this fall and recorded a gaudy 18 total pressures in the final three weeks combined.

A big man with an even larger skill set, he’s the top HBCU lineman in the 2023 NFL Draft class. A smooth mover with excellent hands, Evans was an easy watch this winter. He was dominant against Arkansas back in 2021 and he’s only improved since. The East-West Shrine Bowl will be big for him to showcase his ability, and an excellent week will see his stock continue to rise.

Ark Pine-Bluff’s Mark Evans is a fun watch. ++ feet that remain smooth throughout the snap. Quick hands as well.

Yards after the catch is the name of the game, and while no one will confuse Yurosek for the electric athletic intangibles of some of the top tight ends in the class, his ability to chew up yards with every stride makes it a tall task to topple his 230-pound frame at full speed.

Like the names before him in Dalton Schultz, Austin Hooper, and Zach Ertz, all former Cardinal tight ends who heard their name called on draft weekend, Yurosek’s well-rounded game presents a high-performance floor for teams in need of both a man mover in the run game and aerial weapon to rely upon in high leverage situations.

As each of the aforementioned talents has evolved into high-level pro talents, it’s hard not to believe that the Bakersfield, CA native and former three-star prep talent could blossom into an impact player on Sundays. A former standout on the hardwood that led his high school to a state title in his senior season, it doesn’t take long to notice that Yurosek spent many days battling for rebounds and tough buckets in the paint.

Silky smooth footwork is often a constant with Stanford tight ends, but for Yurosek, everything starts in his lower half. A highly recruited two-way athlete whose prowess as a defensive end initially earned him interest from Power Five programs, his ability to change direction on a whim, slide, shuffle, and burst with ease is what makes him so dynamic now on the opposite side of the ball. Whether he’s in-line with his shoulder glued to the tackle or buzzed out to the boundary, Yurosek’s presence extends a playbook.

A high riser expected to jump “over 40 inches” in the vertical, Maag is going to be a fun prospect to follow this NFL draft cycle.At 6-foot-4, he has no issue in snatching balls over smaller corners, but the main knock on his game will remain his success against bigger, more physical corners when asked to separate off the line of scrimmage. Top-end burst remains a question as well, but scouts I’ve spoken with like the traits and see him as a project that could provide a team with a day-one red-zone threat with the opportunity to improve over time.