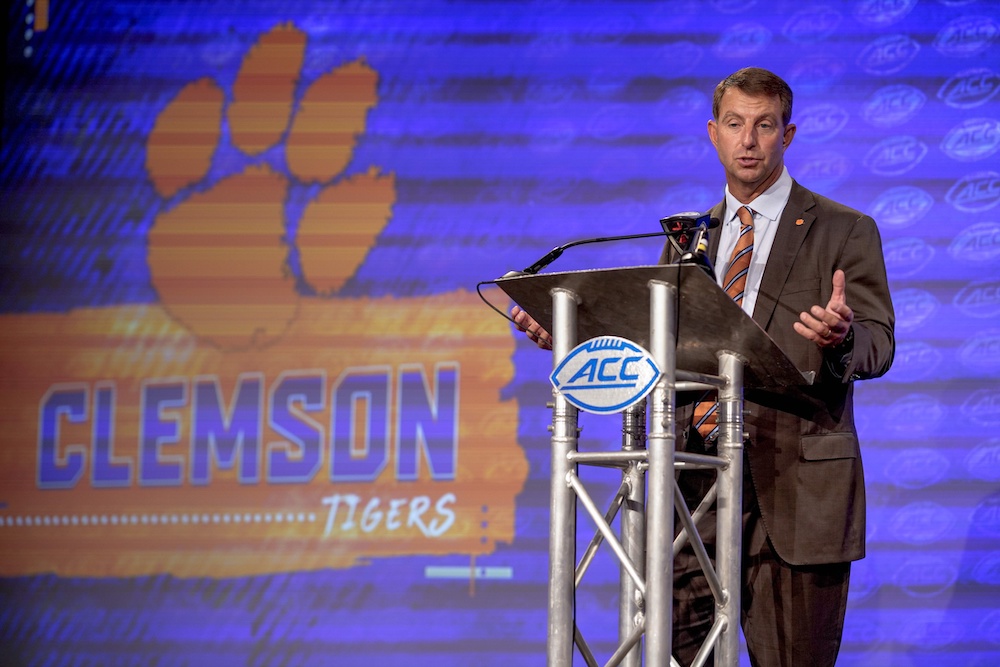 ACC Media Day kicked off Wednesday in Charlotte, North Carolina and TDN’s Joe Marino and I were in attendance to take in the festivities. On day one, we listened to the ACC commissioner along with coaches of the Atlantic division and there were plenty of questions and information delivered throughout the day. I found five takeaways from today’s ACC Media Day coverage.

Coach Dave Doeren was asked about their lack of running the football with two NFL-caliber running backs. Doeren then responded with praise for quarterback Devin Leary, saying his senior signal caller was throwing the football really well and that their goal is to win games. He did not see a reason to force the run with their successful passing attack. Doeren then went on to talk about how much Leary has improved going into this season.

“He is studying defense and being more of a leader by teaching plays to his teammates,” Doeren said. Leary passed for 3,433 yards, 35 touchdowns, and five interceptions in 2021.

Quarterback Sam Hartman talked about the return of wide receiver Donavon Greene in 2022, who missed all of last season with an undisclosed injury. Greene will now pair with last season’s leading receiver A.T. Perry, who Hartman praised for his ball skills and abilities.

Hartman went on to discuss the athleticism and freakish genetics that Greene possesses, too. He is excited to attack defenses with both tremendously athletic wide receivers.

As was evident from the speakers at ACC Media Day this year, the landscape of college football has changed for the foreseeable future and some would say money is the driving force behind the changes. Wake Forest Head Coach Dave Clawson believes college football needs its own commissioner to protect the sport itself.

This is an unconventional thought but one that makes sense for the overall product.

4. The confidence and passion of Boston College HC Jeff Hafley

When Boston College Head Coach Jeff Hafley spoke at ACC Media Day, ears perked up to listen. He oozes the confidence players want in a head coach and prides himself on accountability and honesty. Hafley talked about how he failed the team as a coach, focusing too much on the defensive side of the ball last season. He vowed the offense will be better–starting with getting his star wide receiver Zay Flowers the football. When asked about the new realignment, he said he is open for the challenges of playing different opponents routinely, like Syracuse, Miami, and Pittsburgh. His passion for the game and love for his players was real and evident.

Clemson Head Coach Dabo Swinney backed up his soon-to-be second-year starting quarterback D.J. Uiagalelei. Asked about negative fans, he explained that no young quarterback should be expected not to make mistakes. Swinney insisted that the team will be better around Uiagalelei this season, which should lead to improvement.

“DJ has scars, wounds, shrapnel, and faced adversity– but this will serve him well,” Swinney said. He acknowledged Uiagalelei still has to do his job on the field, but he believes in him this season.