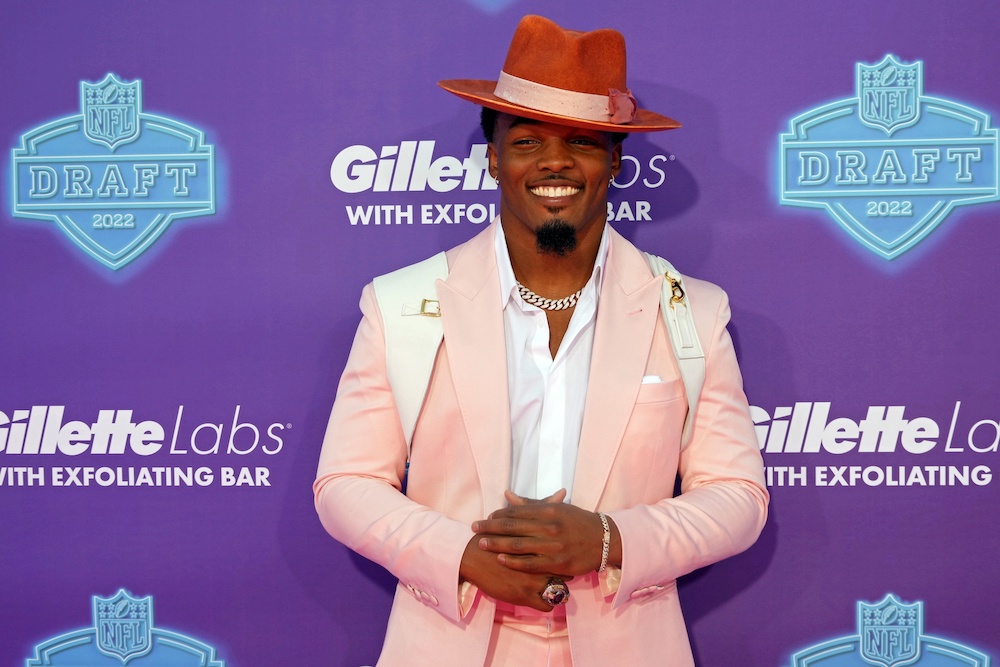 5 Best Players Available After Round 1 of 2022 NFL Draft

The first round of the 2022 NFL Draft reached its conclusion on Thursday night in rather entertaining fashion. To start things off, the Jacksonville Jaguars selected Georgia defensive linemen Travon Walker with the No. 1 overall selection. Several franchises made excellent value picks as certain talents fell further than anyone expected. The Baltimore Ravens selected the No. 1 overall player on our TDN Big Board, Notre Dame safety Kyle Hamilton at 14th overall. Elsewhere, the New York Jets drafted former Florida State edge rusher Jermaine Johnson with the 26th overall selection following a draft-day trade with the Tennessee Titans. The Jets moved up in order to select Johnson, who earned a top-10 grade from our national scouting team.

Several talented difference-makers remain available heading into Rounds 2 and 3 on Friday. Kenny Pickett was the lone quarterback selected on Thursday. Malik Willis, Desmond Ridder, Matt Corral and Sam Howell are all expected to be drafted during the second round, among a litany of other high-end prospects. Having consulted our Big Board, here are the five most talented players available heading into the second round.

No. 7 | Andrew Booth | CB | Clemson
The seventh-ranked player on our board unfathomably remains available following Thursday’s first round in Clemson’s Andrew Booth Jr. He’s an elite cover-man corner that blends overall athleticism with size, instincts, physicality and ball skills, and a franchise is going to draft a future starting cornerback when they pull the trigger on Booth on Friday night. A five-star recruit, Booth enjoyed an outstanding career at Clemson that lived up to expectations. Booth totaled 68 tackles, five interceptions and nine passes deflected in 25 career appearances as a Tiger. A fiery competitor that can thrive in any coverage scheme at the next level, Booth’s overall makeup should allow him to compete for a starting spot on the boundary as a rookie.

No. 21 | Nakobe Dean | LB | Georgia
Two inside linebackers were selected on Thursday night and shockingly, none of them were Georgia’s Nakobe Dean. More than that, the Green Bay Packers surprisingly made Dean’s teammate Quay Walker the first linebacker off the board when General Manager Brian Gutekunst selected him with the No. 22 overall pick. Dean’s sideline-to-sideline ability should be highly coveted by today’s NFL defenses that are forced to cover more ground than ever before while matching speed with speed. Dean’s true three-down ability should allow him to make an immediate impact at the next level. The winner of the 2021 Butkus Award, Dean was recognized as the nation’s most talented linebacker following a historic campaign in which Dean helped the Bulldogs end a 42-year National Championship drought. Linebacker-needy teams should jockey for the right to draft Dean on Friday.

Michigan’s David Ojabo would have almost certainly been drafted in the first round had he not suffered a devastating torn Achilles injury during Michigan’s pro day that will force him to miss his entire first season in the NFL. Ojabo is an exciting pass rusher with rare athletic tools and the first-step explosiveness to threaten opposing offensive tackles on a snap-by-snap basis and a wise franchise is going to get a first-round talent when they draft-and-stash him on Friday night. Ojabo exploded for a career-high 11.0 sacks in 2021, while playing a crucial role in a very effective Michigan defensive front. Ojabo possesses the raw tools necessary to develop into a double-digit sack artist on an annual basis going forward.

No. 29 | DeMarvin Leal | DT | Texas A&M
One of the most polarizing prospects available in the 2022 NFL Draft, Texas A&M defensive tackle DeMarvin Leal remains available heading into Friday night. A former five-star recruit with three seasons of high-level production under his belt, Leal possesses true sky’s the limit potential, but an NFL defensive coordinator will be tasked with further unlocking Leal’s full range of abilities. Leal was rarely allowed to settle into one spot across Texas A&M’s defensive line. Their staff often asked him to play a versatile role that consisted of lining up both inside and outside on any given snap. Allowing Leal the time and patience necessary to settle into one defined role at the next level could help him reach the heights his flashes of brilliance indicate he’s capable of reaching.

No. 30 | Jaquan Brisker | S | Penn State
Three safeties were selected in a first round that closed out with back-to-back picks at the position (Cincinnati selected Daxton Hill at No. 31 overall and Minnesota selected Lewis Cine at No. 32). Penn State’s Jaquan Brisker remains available and should quickly become the first safety drafted on Friday. A former JUCO transfer from Lackawanna College, Brisker projects as a do-it-all safety at the next level that can thrive in a single-high role, in split zone looks and on occasion, in the slot in man-to-man assignments. Brisker was outstanding in an expanded role in Happy Valley in 2021, having accounted for 63 total tackles, 6.0 tackles for loss, five pass breakups and two interceptions. Brisker’s overall combination of length, ball production, hitting power and energy should allow him to quickly earn a starting role in a defensive backfield at the next level.