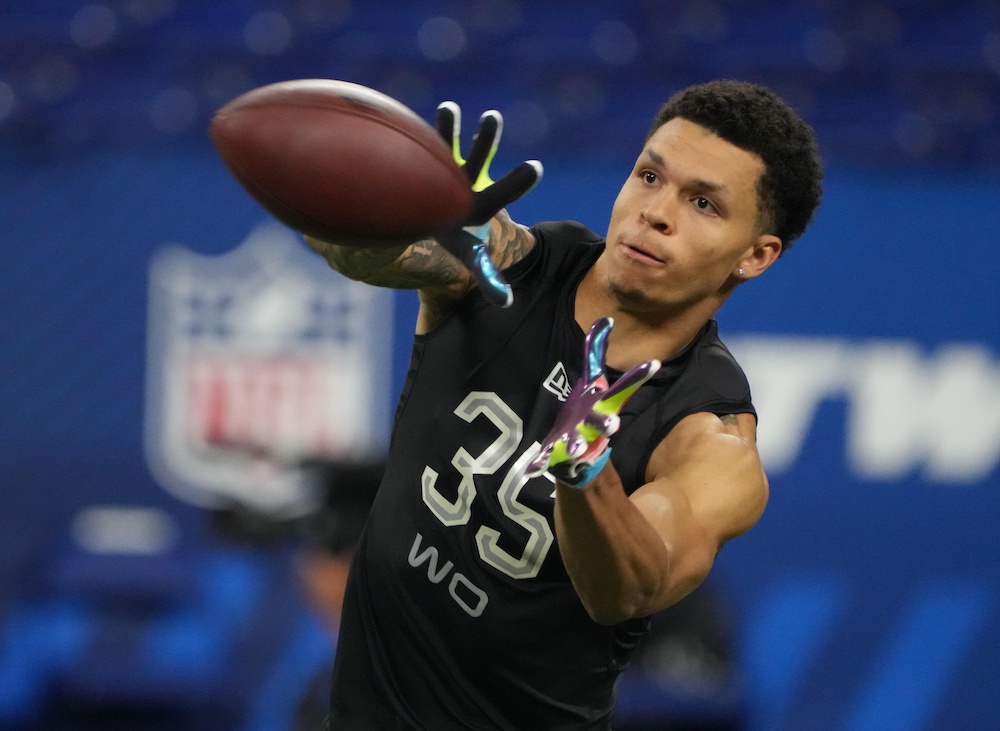 Gone are the days of force-fitting prospects. In today’s game and evaluation process, it’s all about individual player fit. Whether it comes on offense or defense, attempting to fit players into schemes is a never-ending task for general managers across the league. While selections – at times – look like reaches from the outside looking in, many player-to-team matches in the past initially looked upon as head-scratchers often progress into immediate impact athletes in their newfound homes. With seven rounds, and 262 players off the board, here are a few of my favorite scheme fits in this year’s rookie class.

With Davante Adams gone, the Packers – and Aaron Rodgers – needed a thoroughbred on the outside. An explosive 6-foot-4 talent out of nearby North Dakota State, Watson has the chance to win Offensive Rookie of the Year honors working in tandem with the First-Ballot Hall of Famer in No. 12. While he has a ways to go to ever attempt to replicate the production Adams enjoyed for a multitude of years with the Packers, talents like Watson don’t grow on trees. He will be thrown into the fire right away as both a target hog and gamebreaker within newly minted Offensive Coordinator Adam Stenavich’s offense.

A homegrown talent out Divine Child High School in Dearborn, Mich. by way of the University of Michigan, Hutchinson fills a massive need both in between the hashes, the locker room and within a community trying desperately to cling to fandom. He’s Michigan through and through. Interlocking Hutchinson’s play style with Head Coach Dan Campbell’s brand of football, I expect the 2021 Heisman-semifinalist to become one of the more successful sack artists the Lions have had in their franchise’s 93-year history.

A massive man in the middle, pick your poison of who you want to leave in a 1-1 matchup when facing the Eagles this fall. While Davis won’t generate a ton of pressures in the passing game, his size alone makes him a gap-clogger, and tackle-for-loss monster along the guts of a high-octane, veteran Philadelphia front. As his body continues to develop, and he gets stronger and quicker, Davis’ performance ceiling is uncapped working within a front four rotation of Fletcher Cox, Javon Hargrave, Haason Reddick, Milton Williams, Brandon Graham, Josh Sweat and Derek Barnett.

After losing tight end Noah Fant to Seattle in the trade for quarterback Russell Wilson, Dulcich was an excellent addition in my book. He was an absolute standout at UCLA and at the Senior Bowl in Mobile, Ala. Although Wilson hasn’t used tight ends extensively in his history under center, a talent like Dulcich only opens up things further in Denver’s passing game and will allow the Broncos to become a well-rounded offensive attack.

While it almost happened, there was no way the Texans were going to enter the fall with Rex Burkhead as their bellcow –  it just wasn’t reality. With the selection of Pierce, a bruising back that looks to run through defenders’ facemasks any chance he gets, he will provide a sense of identity for a roster in desperate need of such. Not to mention, he will immediately improve the Texans run game with fresh tread left on the tires from his days at Florida.

A long, powerful, explosive 5-technique edge threat, I’m extremely excited to watch Clemons work in Head Coach Robert Saleh’s defensive front. The selection of Jermaine Johnson has received all the praise, and rightly so, but don’t be surprised if Clemons progresses into a high-impact sack artist in his own right on the opposite side. He won’t be thrown into snaps right away, which will allow him to remain fresh, and that could be the ideal scenario for him to garner at least a handful of sacks in his first season working behind Carl Lawson.