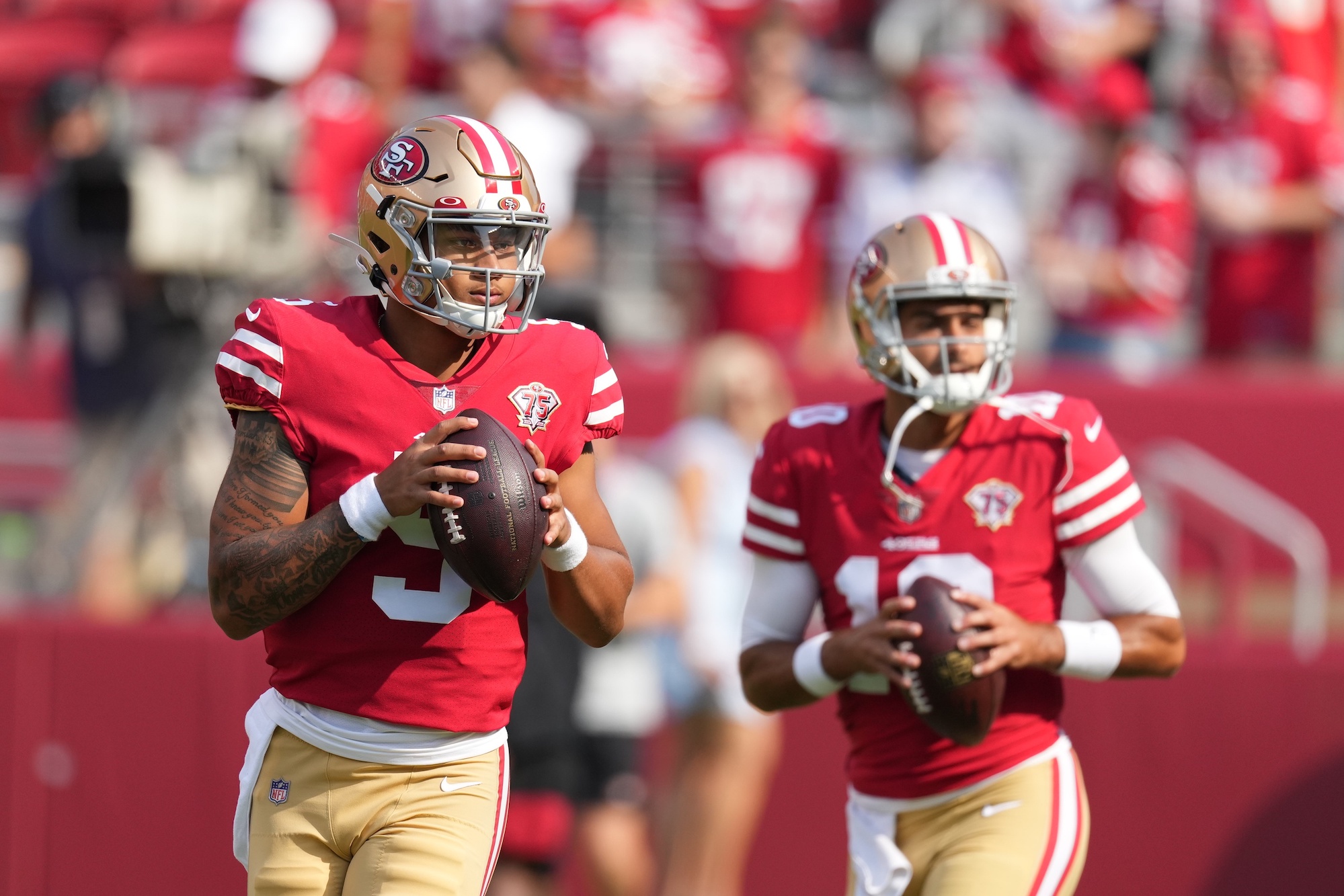 What’s Going On With The 49ers?

Before last year’s draft, the San Francisco 49ers mortgaged their future and traded up to select quarterback Trey Lance with the second overall pick. Lance entered the league after lighting up FCS defenses at North Dakota State in 2019, combining for nearly 4,000 all-purpose yards and 42 touchdowns. He did not have a chance to follow that performance up after the Bison’s 2020 season was canceled due to COVID-19. Though Lance was 1-2 during his rookie season with the 49ers, his late-season performance against an admittedly bad Houston Texans showed some hope for the future, right?

Matt Lombardi reported that the team has been “continually underwhelmed” with Lance. Combine this with the lack of movement on a deal to get former starter Jimmy Garoppolo out of the building and giving Lance the keys to the franchise entirely, and it may be trouble in paradise out in the Bay. Let’s look at their offseason to see how the perennial contenders are gearing up for another run at the Lombardi.

The 49ers double-dipped on the secondary, adding cornerback Charvarius Ward from the Kansas City Chiefs and safety George Odum from the Indianapolis Colts; both will have the chance to have featured roles in defensive coordinator Demeco Ryans’ scheme. Outside of those moves, the 49ers were able to get special teams help in wide receiver Ray-Ray McCloud and linebacker Oren Burks and depth across the defensive line with the signing of Hassan Ridgeway and Kerry Hyder. Though San Francisco was able to pick up quality players, their free agency period was more about who they lost. Guard Laken Tomlinson, who made the Pro Bowl last season, went to the New York Jets and former starting running back Raheem Mostert went to the Miami Dolphins. They also lost starters like Arden Key, who went to the Jacksonville Jaguars after having a career revival rushing opposite Nick Bosa last year, and cornerback K’Waun Williams and defensive tackle DJ Jones both to the Denver Broncos.

After trading their first-round pick last year as a part of the Lance deal, the 49ers did not pick until the second round, when they selected edge rusher Drake Jackson from USC. They used their next three picks on the offensive side of the ball, picking running back Tyrion Davis-Price from LSU, wide receiver Danny Gray from SMU, and Spencer Burford, an offensive lineman from UTSA. The rest of their picks grabbed solid depth in the secondary and across the trenches. Jackson had flashes of being a game wrecker as a Trojan but never consistently put it together. The selection of Davis-Price is head-scratching after selecting two running backs in last year’s draft and the rest of the backs that were still on the board at the time, but the Gray and Buford picks were both good selections that have the potential to see the field early on.

After looking at the team and where their offseason is, it is clear that they are prepped to make another deep playoff push and loaded all over the field. Though star receiver Deebo Samuel wants out, there appears to be a small market for Samuel which likely negates any chance of him leaving the franchise before the 2022 season. This means that the situation at quarterback needs to be solved even quicker to ensure that a prime opportunity to capture the Lombardi trophy isn’t thrown down the drain. Lance is the future. Do whatever it takes to get Garoppolo off the roster and use that money to get another playmaker at any spot on the field and take advantage of a lackluster NFC.