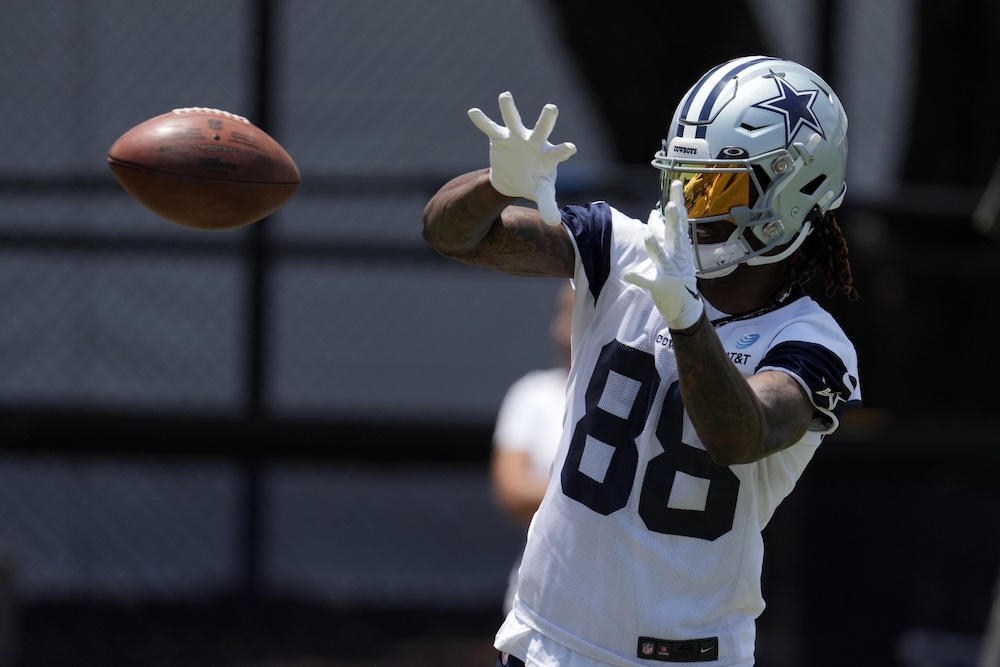 In a league that is constantly producing young stars, we often overlook players who don’t hit the ground running and immediately make an impact. Not every rookie can be Micah Parsons, Justin Jefferson or Justin Herbert. Sometimes a player takes time to develop and hit their ultimate ceiling and become a star and oftentimes the delay in their development is completely out of their hands. Whether it’s due to injuries, organizational dysfunction or a lack of opportunity, a talented player can take time to truly pop. Every year there are players throughout the league that are primed for a breakout season – players who are on the cusp of stardom that just need to take the next step. Last year we saw Deebo Samuel of the 49ers thrust his way into stardom with a breakout season in which he finished fifth in the league in receiving yards and was a revelation carrying the football out of the backfield. Similarly, Cowboys corner Trevon Diggs inserted himself into the conversation as he broke out leading the league in interceptions with 11. Both players took a few seasons to finally emerge as star NFL players but once things clicked, they really took off.

As we get in the swing of things with camp underway, I wanted to look at three players who are on the cusp of stardom and with a strong season in 2022 will leave no doubt about where they rank among the league’s best.

Young entered the NFL in 2020 with as much hype as a defensive player can possibly have. He was dubbed as a can’t miss prospect who was destined for greatness. He was compared to Hall of Fame-level NFL players such as Myles Garrett, Joey Bosa and Von Miller and was expected to be a double-digit sack guy from day one. Young started his NFL career off hot with a very strong rookie season which saw him win NFL Defensive Rookie of the Year and earn a nod to the Pro Bowl. He registered 7.5 sacks that year and was excellent in the run game as well. He was expected to take a massive step in his sophomore season and cement himself amongst the league’s best edge defenders. Unfortunately, things didn’t go as planned as Young struggled for most of his second season, as he was only able to record 1.5 sacks in nine games before suffering a torn ACL. While the ACL injury was a massive bummer for a player with such high expectations, his play before the injury was highly concerning. He didn’t look like the same player as he did in his rookie season, but we know sophomore slumps happen and Young isn’t the first player to experience one. With all that said, 2022 is a major year for Young as he looks to not just return from injury but also finally earn his way into NFL stardom. Few NFL players have his physical attributes and raw talent. He has raw explosiveness, power and flexibility, along with very good football instincts. Young has the upside to have the same level of impact as a guy like Garrett and I believe 2022 is the year we see him put it all together. Look for a double-digit sack year from Young and for him to become a star player in the league.

When discussing the top young receivers in the league, NFL players such as Justin Jefferson, Ja’Marr Chase, AJ Brown, DK Metcalf, and Terry McLaurin are names you’ll hear. A name that often won’t be in that group is Cowboy’s receiver CeeDee Lamb. A former first round pick back in 2020, Lamb was drafted before Jefferson but has yet to make anywhere close to the impact as the former LSU Tiger. I expect that to change following this season. When Lamb entered the league, he joined an offense that already had an established number one receiver in Amari Cooper. Cooper was coming off back-to-back strong seasons and showed good chemistry with quarterback Dak Prescott. The expectations for Lamb were more about being a complementary piece rather than a true number one. He wasn’t getting the targets that his talents warrant in his rookie season and then to make matters worse, Prescott suffered a season-ending foot injury early in the year, forcing Lamb to play with suboptimal quarterback play the remainder of his rookie season. Lamb still finished the season with 935 receiving yards and five touchdowns in his first season amidst all the adversity. In 2021, Lamb enjoyed another strong season and finally emerged as the Cowboys’ go-to option. He led the team in targets, receptions, yards and touchdowns and began to show the playmaking ability that made him such a highly coveted prospect. As we look toward 2022, the arrow is pointing all the way up for Lamb. The team traded Cooper to the Cleveland Browns this offseason clearing a path for Lamb to be the unquestioned number one receiver for the Cowboys’ offense. I expect the passing game to run through Lamb and I believe he will more than capitalize on this opportunity. Lamb has the type of talent to lead the league in receiving yards and I don’t think it’s out of the question that he does just that. When all is said and done after the 2022 season, people won’t be able to keep Lamb’s name off any list that discusses top receivers in the NFL.

Patrick Surtain II is the one second-year player who makes the list. People may think I am taking the easy way out here as Surtain II is coming off an outstanding rookie season establishing himself as one of the better young corners in the league. Well, I am such a believer in this player’s game that I believe that when the 2022 season is over Surtain II will be mentioned not just amongst the league’s best corners but the league’s best defensive players, regardless of position. Surtain II possesses outstanding size and athleticism but also couples that with the technique and football savvy of a 10-year NFL veteran. He showed an ability to lockdown opposing teams’ number one receivers and made a ton of plays on the football which is the mark of a truly great corner. It’s so rare to see corners come into the league and have early success but the truly great ones do and that’s the tier that Surtain II finds himself in. NFL players like Jalen Ramsey, Marshon Lattimore and Tre’davious White all had strong rookie seasons and have parlayed that early success into having All-Pro and Hall of Fame type of careers. I see no reason that Surtain II can’t follow in their footsteps and fully expect a huge year coming for him in 2022 as he solidifies his status as an NFL star.