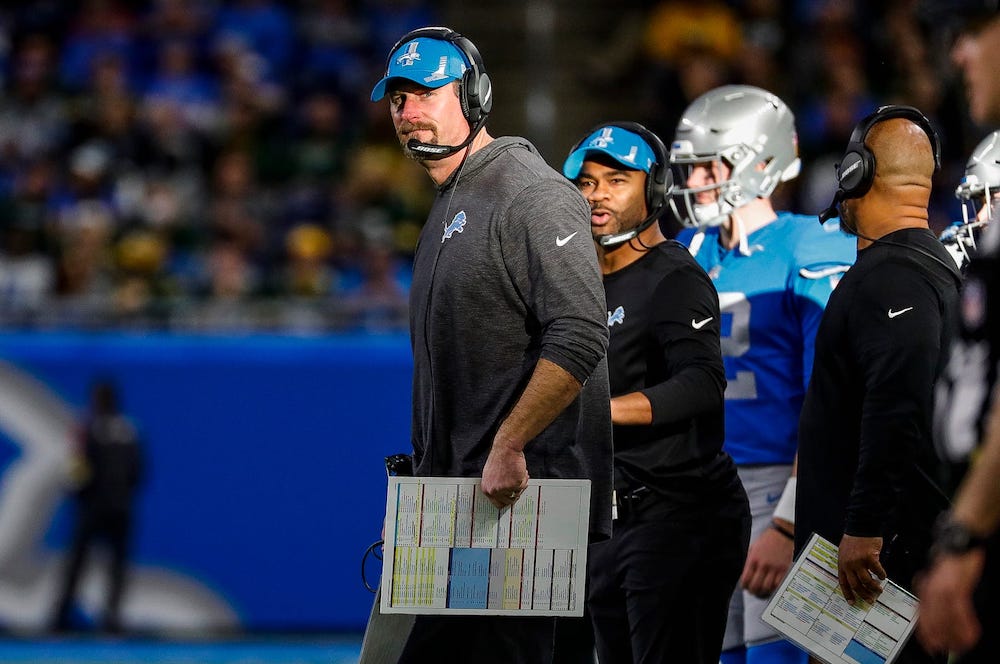 According to multiple reports, the next iteration of HBO’s popular Hard Knocks series will focus on the Detroit Lions. The five-episode season debuts on HBO on Tuesday, Aug. 9 (10 p.m. ET) and will be available to stream via HBO Max. The rebuilding Lions went 3-13-1 last season and the series is expected to chronicle the offseason efforts of Head Coach Dan Campbell and General Manager Brad Holmes, as both men attempt to retool and improve a struggling squad.

Campbell should be an especially popular figure, as his emotional and tough-natured personality made headlines from his very first press conference (bite those kneecaps, coach). Campbell’s staff features several former players, including Assistant Head Coach Duce Staley, Defensive Coordinator Aaron Glenn, quarterbacks coach Mark Brunell and receivers coach Antwaan Randle El to name a few. Analyzing how these player-turned-coaches have made their transition should make for wonderful television. Furthermore, the Lions own the No. 2 overall selection in April’s 2022 NFL Draft. A peek into Detroit’s process regarding how they evaluated potential prospects would especially make for fascinating programming.

With yet another exciting chapter of Hard Knocks on the horizon, we’ve identified three potential storylines we’re excited to monitor.

The Lions will make a critical, franchise altering decision in late April when they officially select a player with the No. 2 overall pick in the 2022 NFL Draft. Lions fans will undeniably obsess over their new star, one that will be quickly anointed as the franchise’s savior. Hard Knocks represents an excellent opportunity for that player to quickly endear himself to the franchise. Holmes could realistically select a quarterback with Liberty’s Malik Willis recently presenting himself as an exciting and tempting option. Willis’ rare arm talent would shine throughout the months of August, which often marks Hard Knock’s most enticing filming period. Georgia’s Travon Walker, Michigan’s Aidan Hutchinson and Oregon’s Kayvon Thibodeaux represent top-notch alternative choices as game-changing EDGE defenders.

Whoever the Lions choose, the up-close-and-personal nature of Hard Knocks will allow for an intimate experience between viewer and player. The camera crew will certainly place an emphasis on following around this rookie’s first career professional training camp, and Detroit’s excitement should reach an all-time high. Selecting a quarterback such as Willis would especially make for must-watch television but whatever Detroit decides will ultimately lead to exhilarating programming nonetheless.

THE UNFOLDING OF A NEW-LOOK, EXCITING LIONS WR ROOM

Randle El has been extremely vocal throughout the offseason regarding Detroit’s requirement to add game-changing receivers to the fold ahead of the 2022 campaign. The Lions entered last season with one of the weaker groups of pass-catchers across the entire league. Detroit’s leading receiver was impressive fourth-round rookie Amon-Ra St. Brown, who secured 90 receptions for 912 yards and five touchdowns while serving as Detroit’s only model of consistency at the position. The Lions leaned on veteran journeymen such as Kalif Raymond behind St. Brown and more was clearly required. The mid-season arrival of the resurgent Josh Reynolds helped.

Reynolds and Raymond both re-signed with the Lions earlier this offseason but Holmes is hellbent on providing quarterback Jared Goff with more playmaking weapons going forward. The Lions signed former Jaguars receiver D.J. Chark to a lucrative one-year, prove-it deal in March, partially fulfilling the vision Randle El discussed at the Senior Bowl. Chark undeniably moves the needle forward but the Lions are still expected to draft a receiver relatively early, potentially with the second of their two first-round choices. Watching how this new-look receiver room comes to fruition throughout training camp will be electrifying.

Many pegged Campbell as a potential “one-and-done” candidate following his appointment in January of 2021. A former tight end, Campbell represented an outside-the-box hire for a Lions franchise that was clearly in transition. Detroit expectedly struggled throughout Campbell’s debut season as their head honcho, crawling to three regular-season victories, the first of which occurred in a Week 13 nail-biting finish against the division-rival Minnesota Vikings. Until that moment, an 0-17 campaign appeared possible for a struggling Lions team.

The Lions made a somewhat surprising decision when they decided to retain Campbell for the 2022 season but it’s also easy to understand why Detroit’s brass has fallen head over heels for their passionate leader. Campbell is an emotional commander that wears his heart on his sleeve and became emotional throughout several postgame press conferences following a close, painful loss, eventually delivering heartwarming locker room speeches following Detroit’s three wins. Campbell now has an excellent opportunity to improve the Lions in 2022. Their free agency dealings, when paired with their premium draft selections, boost Detroit’s winning efforts next season. Analyzing how Campbell navigates through that pressure will be sensational.