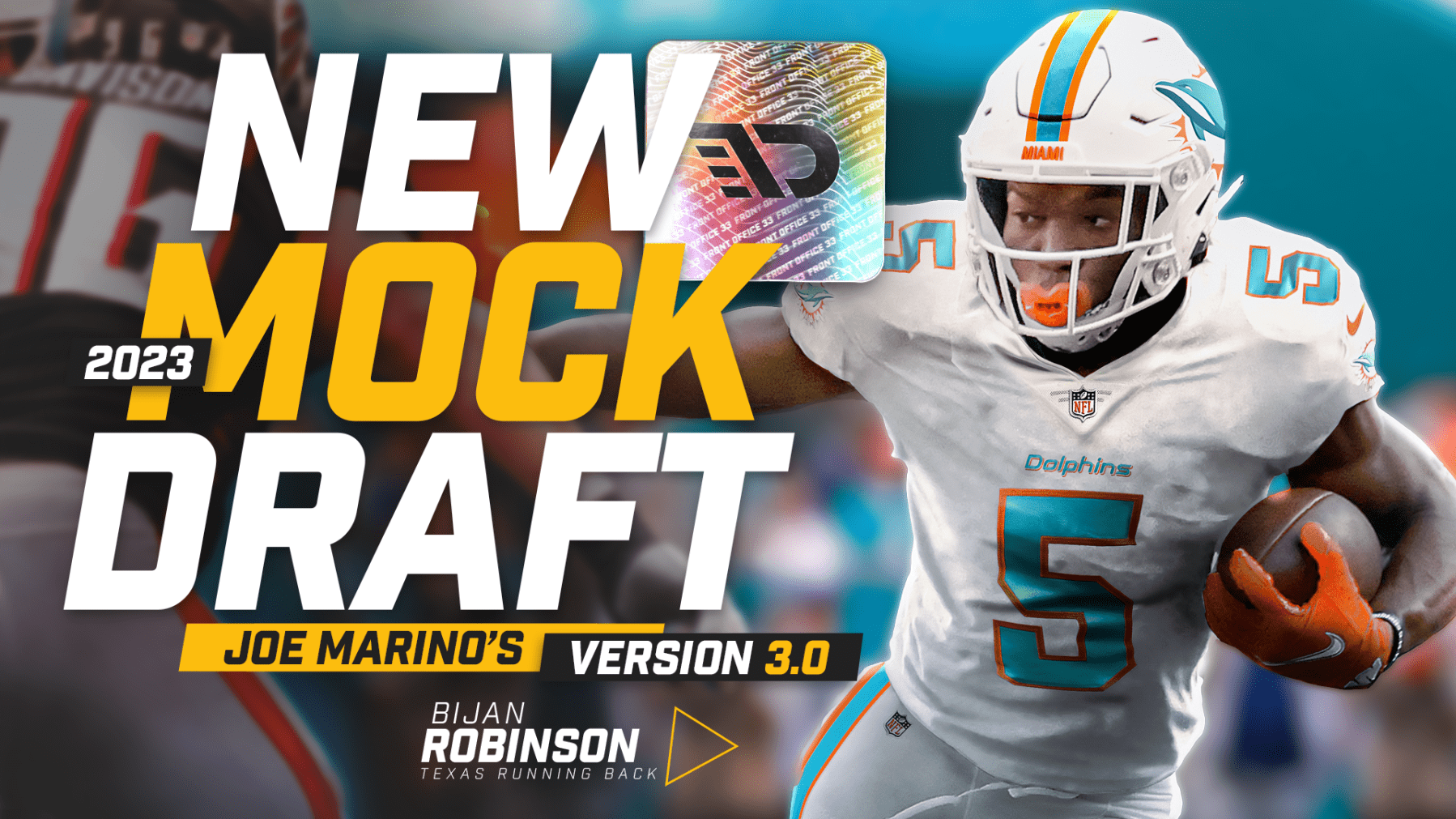 We’re seven weeks into the 2022 NFL season and while there has been some clarity gained on who the very best and worst teams in the league are, the middle tier couldn’t be more cluttered. The week-to-week parity of the NFL has reached new heights this season which should lead to an exciting stretch run. While the standings have plenty to sort out, let’s take a look ahead at how the current draft order matches up with the rising talent from the college ranks where things also remain quite fluid. The order of teams in this NFL mock draft aligns with the current NFL standings, so if you are not happy with where your team is slated to pick, be mad at them.

If the Lions earn the No. 1 overall pick, then it’s time to pull the trigger on a quarterback. There will be plenty of debate over which quarterback is the right choice, but the good news for teams picking at the top of the 2023 NFL Draft is that there will be options. Bryce Young lacks size but his playmaking instincts and intangibles combined with the opportunity to reunite him with Jameson Williams gives him a real shot to be the Lions’ guy in this NFL mock draft scenario.

I don’t believe there is a single position that is close to being solidified on the Texans’ roster, which creates for an easy approach to the 2023 NFL Draft: Pick the best player on the board. In this scenario, there is no question that Will Anderson Jr. is the logical choice given his upside as a disruptive pass rusher.

The Panthers have thrown plenty of darts in its efforts to replace Cam Newton at quarterback, but none of those darts included an early investment in the NFL draft. That changes this time around as the Panthers land a toolsy passer that is building an exceptional resume that instantly provides Carolina with the most intriguing young quarterback in the NFC South.

4. Philadelphia Eagles (via NO)

Howie Roseman has his football team in incredible shape. Not only is Philadelphia the lone unbeaten team remaining in the NFL and appear to be the class of the NFC, but the Eagles are in a position to have a high pick in the draft courtesy of last offseason trade with the Saints. Myles Murphy is a long, powerful, and explosive defensive end that fits the typical Roseman mold at the position.

If the Texans are picking this high—twice—in the 2023 NFL Draft, then the quarterback position is impossible to ignore. Will Levis is built like an action figure, runs the football like he’s George Kittle, and has a rocket launcher for a right arm. Those are traits worth betting on in this NFL mock draft, even if he occasionally colors outside the lines.

The success of the Seattle offense has been among the most pleasant surprises so far this season, but the defense has some catching up to do. Bryan Bresee is a powerful and explosive interior presence that has the ability to dominate against the run and apply heat on the quarterback.

I like the direction that Jacksonville is heading, but I still believe the team can afford to add even more playmakers around Trevor Lawrence—especially a speedy receiver that can stretch the field. That’s exactly what the Jaguars would get in Jordan Addison, who is an outstanding separator that can create for himself with the ball in his hands.

I like what the Raiders’ defensive line has on the edge but the interior leaves much to be desired. That would change immediately with the addition of Jalen Carter, who is an explosive athlete with incredible playmaking instincts. He would be a force alongside Maxx Crosby and Chandler Jones.

The Steelers need to find answers at a number of positions but the corner room stands out the most. Kelee Ringo has every trait needed to become a shutdown guy at the next level and will enter the NFL with plenty of experience against top competition on the biggest stages that college football has to offer.

The next offseason for the Bears has to be all about offense—not only to provide Justin Fields his best chance to prove himself but in case he isn’t the answer, to make sure the next guy gets a better opportunity to develop and execute. There isn’t enough hype around Broderick Jones right now, but I believe he has a chance to be the top offensive lineman off the board next spring. He offers an exciting package of size, power, movement skills, and technique.

The Falcons’ linebacker room has very quickly become a different-looking group in a short period of time and is in need of a long-term quarterback of the defense. Trenton Simpson is a tailor-made modern-day linebacker that has exceptional range, coverage skills, and the ability to play in space.

The Dolphins might have bigger needs than running back but they won’t find a better player on the board at this point than Bijan Robinson. He is a do-everything talent that could help further maximize what Miami has on offense with Jaylen Waddle and Tyreek Hill at receiver.

The Cardinals need plenty of things, among them are difference-makers on the defensive front. Tyree Wilson is a rare physical specimen that is developing into a dynamic playmaker for the Red Raiders’ defense. He is a balanced defender that can play multiple spots along the defensive front.

The Commanders’ cornerbacks have been wildly inconsistent this season and need some new options in the mix. Joey Porter Jr. is a long and athletic cover man that knows how to make plays on the football with the makeup of a top corner at the next level.

Keeping up with the musical chairs that have been the Packers’ offensive line in recent years has been tiresome. While the Packers have made plenty of day-three picks on offensive linemen, it’s time for a premium investment in what can be a stabilizing player. That’s exactly what Green Bay would get in Peter Skoronski, a polished technician that could kick inside in the NFL.

The Patriots’ defense has mostly performed well in 2022 and received strong contributions from young players in the secondary, which makes it easy to look toward the offensive side of the football for this NFL mock draft. I believe New England would most benefit from adding a true field-stretcher with size and that’s what they would be getting in Quentin Johnston.

The Colts have quietly gone from having an elite offensive line to one with question marks over the last few seasons, with the most notable concern coming at left tackle. Paris Johnson Jr. is a smooth operator with quick feet and good length that would pair nicely with Quenton Nelson on the left side.

There hasn’t been a more disappointing team in the NFL this season than the Buccaneers and a reset feels inevitable. While it’s hard to consider how deep the reset could be, a new direction at quarterback post-Tom Brady is critical. Hendon Hooker has been the hottest player in college football and his growth has been a joy to watch. He is a dynamic vertical passer that has illustrated incredible leadership in Tennessee’s resurgence as a program.

The Lions need to make notable strides on defense and more consistency in coverage would be a good place to start. Cam Smith is sticky in coverage but also has top-tier ball skills and loves to be physical when defending the run and when tackling. He has the makeup of a guy that can compete with opposing teams’ top target.

As defenses present new problems for Justin Herbert to face as he continues his development as a quarterback, a weapon at tight like Michael Mayer could prove to be invaluable. Mayer is exceptional at finding space in defenses with strong hands and a competitive demeanor that makes him perfect to pair with Herbert.

I’m impressed with the contributions that Baltimore has received so far from Justin Houston, but obviously he isn’t a long-term solution. Isaiah Foskey is a versatile defender that is a nuanced pass rusher and smart run defender that can even occasionally execute in space.

The best defenses in the NFL are built along the defensive line and given the need Seattle has to improve on defense, it makes sense to double-dip on defensive linemen in the first round. Derick Hall has emerged as one of the SEC’s best defensive playmakers with his hot motor, power, athleticism, and balanced skill set.

Considering how uneven his play has been, surely the Cincinnati Bengals are in the market to replace Eli Apple. The upcoming draft could provide the perfect opportunity to find an option. Christian Gonzalez offers a rare blend of size, length, and athleticism that makes him versatile with plenty of upside.

The Titans have to become a more dynamic football team on offense and that starts with better options in the passing game. While injuries have derailed Jaxon Smith-Njigba in 2022, he’s still the same guy that outproduced Chris Olave and Garrett Wilson in 2021 and can help elevate the Titans’ offense.

The Jets have experienced plenty of attrition when it comes to the offensive line, signaling a need for more depth and even some upgrades. Jaelyn Duncan is a powerful man with plenty of length and the mobility to be a standout in pass protection. For a team in need of long-term building blocks up front on offense, Duncan would be a wise choice.

The Cowboys will go as far as Dak Prescott can take them, which has been complicated by injuries of late. That said, improving his protection up front and bolstering the run blocking to allow Ezekiel Elliott to function can only help. Dawand Jones is a mountain of a man that can create displacement in the run game and is a wall to get around in pass protection.

I love the idea of what a talent like Darnell Washington can mean for the Vikings’ offense. Not only is he an exceptional run blocker that can be an asset for Dalvin Cook, but he is a massive and athletic target in the passing game. His unique skill set could be an X-factor in the development of the Vikings’ offense under Kevin O’Connell.

The Chiefs’ wide receiver corps was overhauled last offseason and there is a chance it looks different again after the next offseason. As Kansas City’s roster continues to become more expensive, the need for major contributors on rookie deals is critical. Kayshon Boutte is the most physically dynamic wide receiver in the rising class and pairing him with Patrick Mahomes could be lethal.

I’ve loved watching the Giants have immediate success under Brian Daboll and it’s exciting to think about what he can accomplish as the roster becomes more talented. At this point in this NFL mock draft, a true quarterback of the defense like Henry To’o To’o is exactly what Wink Martindale needs to elevate the defense as the young talent continues to develop.

While the Bills could be starting at holes at linebacker and safety depending on what is done with the contracts of Jordan Poyer and Tremaine Edmunds, the left guard position is also a concern—Rodger Saffold is the starter at an expiring contract. John Michael Schmitz is a powerful blocker that can elevate the Bills’ rushing offense while providing sturdy protection for Josh Allen.

The Eagles feature a fairly complete roster but do have some expiring contracts to be mindful of, one of them being James Bradberry at corner. If Bradberry isn’t re-signed, the 2023 NFL Draft could present some options to help replace him. Garrett Williams is a physical corner with exciting ball skills that could step in opposite Darius Slay.