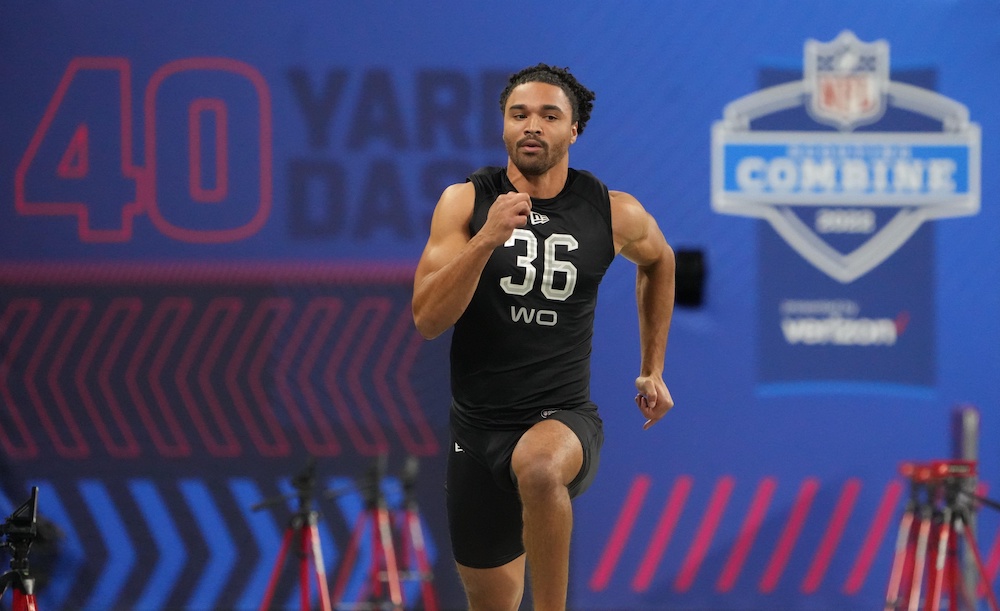 With just six days remaining until Roger Goodell kicks off the 2022 NFL Draft in Las Vegas, there still remains a handful of prospects relatively unknown to the public eye. With an overload of depth expected to come out of this year’s class, here are five sleepers to keep an eye on as teams round out their selection process.

With ideal height/weight/speed, Weston could be one of this year’s late round sleepers within a deep talent pool of pass-catchers. After running 4.42 40-yard dash and jumping 40 inches in the vertical jump at 6-foot-3, teams in need of fresh legs towards the backend of the draft should look no further. With two 800+ yard campaigns in his three collegiate seasons, all the tools are there for Weston to challenge for snaps come training camp.

A late riser in the draft process, don’t be surprised to hear Bland’s name in the early portions of Day 3. A rangy defender with high level instincts and closing speed, he’s a natural playmaker at the position and would also provide a ton of value on special teams with his length and ability to wrangle down wideouts in one-on-one opportunities.

After spending six seasons at Memphis – yes, six – Dykes is someone I expect to have a role in the NFL down the line. Whether it’s at fullback, at tight end, or as a core special teamer, his physicality and athleticism was impressive on tape, and he’s someone that could become a sneaky addition for a franchise that uses a fullback within their offense. Lots of Michael Burton vibes with the versatile talent in Dykes.

One of the top pulling guards in college football, Poe has been on the radar of NFL teams for quite some time but still remains one of the sleepers to the national media. He initially popped on tape against Alabama, where his fluid, powerful, and explosive lower half allowed him to climb to the second level with ease while maintaining balance and awareness for closing linebackers and downhill safeties. With excellent footwork to boot, he’s a talent I expect to provide excellent depth for teams in need of fresh bodies up front.

A quarterback convert, Gaines’ game fits seamlessly at the NFL level. A nightmare to cover in man coverage, he enjoyed four highly productive seasons for Marshall and could slide in as a high-level third tight end at the start of his career. At 6-foot-3, he’s everything coaches look for in creating mismatches and his tape showed a player with the ability to run the full route tree on top of slippery movements at the top of his route stem to create seperation. He’s an extremely intriguing athlete.

Dabo was a standout player for the Stuttgart Scorpions in Germany’s youth football league. Although Dabo failed to receive any offers to play college ball in the United States, he shined at a preseason workout for the Stuttgart Surge, made the roster, went on to earn the European League’s Defensive Rookie of the Year award last fall and was selected to be apart of the NFL’s International Pathway Program. He has a ton of room to grow if he looks to ever make an NFL roster, but the Indianapolis Colts hosted him for a Top 30 visit and after recording a 4.42 40-yard dash, and a 40.5-inch vertical at Arizona State’s Pro Day, scouts have become well familiar with Dabo (6-foot-1, 210 pounds), and so should you.