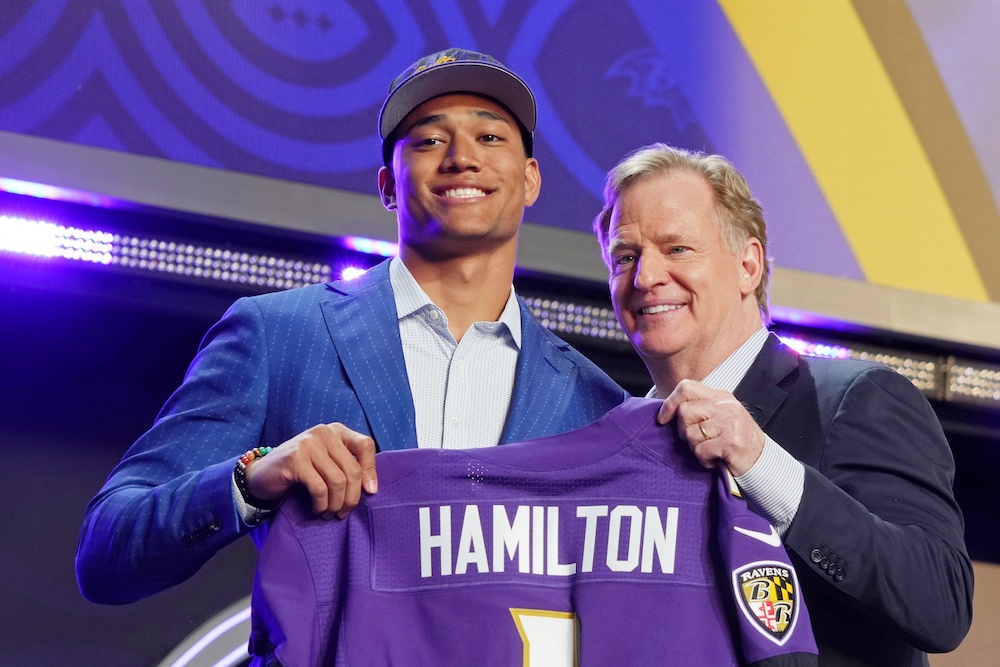 The first round of the 2022 NFL Draft is officially in the books and what a whirlwind it was. The Jacksonville Jaguars kicked the festivities off by appropriately selecting Georgia’s Travon Walker with the No. 1 overall selection. From there, several surprise selections revealed themselves. The New Orleans Saints, Detroit Lions and Philadelphia Eagles traded up to No. 11-13 respectively in three separate occurrences that completely shook up the first-round order and outcome. The Saints moved up to draft Ohio State’s smooth and efficient wide receiver Chris Olave, the Lions made the move for Alabama’s speedster Jameson Williams and the Eagles made an aggressive trade in order to select Georgia’s dominant defensive tackle Jordan Davis. Several prospects went higher than expected (Cole Strange and Tyler Smith), whereas others lasted longer than most anticipated they would (Jermaine Johnson II).

Several talented players remain on the board as we head full-steam ahead for Rounds 2 and 3 on Friday evening.  As we prepare for more craziness throughout the weekend ahead, we’ve identified some winners and losers from Day 1 of the 2022 NFL Draft.

The Giants squeezed the most out of their two top-10 selections by drafting Oregon’s Kayvon Thibodeaux with the No. 5 overall selection and Alabama’s Evan Neal with the No. 7 overall pick. Both Thibodeaux and Neal were once considered to be the top overall selection at their respective positions in the 2022 NFL Draft. Furthermore, Neal and Thibodeaux play premium positions that happened to be of need for General Manager Joe Schoen’s new-look Giants.

Neal should immediately step into the starting right tackle role opposite blindside protector Andrew Thomas, who the previous regime drafted in the top-five in 2020. Neal started 12 games at right tackle for the Crimson Tide in 2020. His familiarity with the position should allow him to quickly acclimate to the right side at the next level. An underwhelming Giants defense that recorded just 34.0 sacks in 17 regular-season contests last season receives a significant injection of talent with the drafting of Thibodeaux. Only eight teams recorded less quarterback takedowns than the Giants did a year ago. Thibodeaux’s rare combination of speed, power, first-step explosion and overall athleticism should quickly help him develop into a double-digit sack artist at the next level.

Giants fans had plenty of reason to be optimistic regarding the future direction of their franchise. Schoen is an excellent general manager and he was a big-time winner on Thursday.

The Minnesota Vikings executed a confusing blockbuster draft-day trade with the Detroit Lions. The Vikings sent No. 12 and 46 overall to the Lions in exchange for No. 32, 34 and 66. According to Rich Hill’s Trade Value Model, the Vikings parted with picks worth a total of 1,640 draft points and received just 1,410 back from Detroit. Minnesota’s willingness to include the 46th overall selection is flat out scratching.

The Vikings ended up drafting a quality player at 32nd overall in Georgia safety Lewis Cine but they should have received better value via their deal with Detroit. Vikings General Manager Kwesi Adofo-Mensah is in his first season as Minnesota’s chief decision-maker. Adofo-Mensah will hopefully make better decisions going forward.

The Ravens have long been one of the smartest NFL franchises across the entire league and Thursday further cemented that belief. Ravens General Manager Eric DeCosta sat back patiently and allowed the board to fall to him as a trio of draft-day trades occurred right before his eyes. The Ravens refused to panic and simply drafted the best player available, Notre Dame safety Kyle Hamilton. The consensus No. 1 overall player on TDN’s Big Board, Hamilton’s blend of size, speed, length and overall athleticism makes him an incredibly unique defender that’s capable of playing in multiple alignments while covering every blade of grass.

Hamilton joins Marcus Williams in Baltimore and the two should immediately form one of the most feared duos at the safety position in the league. The Ravens entered the offseason desperately requiring upgrades in the secondary after allowing a league-leading 278.9 passing yards per contest last season. Baltimore’s Swiss-cheese secondary must be better prepared to play in a division alongside Joe Burrow and Deshaun Watson going forward. Hamilton helps them achieve that.

Furthermore, DeCosta traded wide receiver Marquise “Hollywood” Brown to the Arizona Cardinals in exchange for the No. 23 overall selection. Baltimore’s offense will miss Brown, but they received excellent value in return for his services. DeCosta then executed another draft-day trade after swinging a deal with the Buffalo Bills. Baltimore picked up an extra fourth-rounder (No. 130 overall) for their willingness to move back just two spots (from No. 23 to No. 25). The Ravens then selected Iowa center Tyler Linderbaum, who was largely considered the best center in the nation. Linderbaum is a pro-ready prospect that should have a lengthy and fruitful professional career.

After weeks of vehemently denying they would entertain a trade for their disgruntled superstar wide receiver that’s due a new contract, Titans General Manager Jon Robinson traded A.J. Brown to the Philadelphia Eagles in exchange for the No. 18 overall selection and a 2022 third-round pick (No. 90). Brown immediately agreed to a sizable four-year contract extension with the Eagles worth $100 million, $57 million of which is guaranteed. Robinson then drafted Brown’s replacement with the pick he received in return for his services: Arkansas’ Treylon Burks. Burks essentially becomes Tennessee’s No. 1 receiver opposite the aging Robert Woods. Expectations for Burks’ rookie season just became incredibly lofty.

Tennessee’s refusal to pay Brown a dollar amount that accurately reflects his market value is difficult to understand. The 24-year-old Brown has several 1,000-plus receiving yard seasons in his future and the Titans can only pray that Burks develops into a receiver of Brown’s quality. Robinson then executed another draft-day trade, this time with the New York Jets. The Titans dealt away their original selection, the No. 26 overall pick, and the No. 90 overall selection they acquired from Philadelphia in the Brown-Burks trade, in exchange for a second-round selection (No. 35), a third-round selection (No. 69) and a fifth-round selection (No. 163). Tennessee received questionable value in return throughout both of their draft-day blockbusters.

Look for the Titans to add a quarterback such as Liberty’s Malik Willis or Cincinnati’s Desmond Ridder on Friday.

Many expected the Packers to finally draft a wide receiver in the first-round after a two-decade refusal to do so. General Manager Brian Gutekunst made a shocking, yet on-brand decision to pass up on the opportunity to draft a premium pass-catching talent despite owning two-first round selections. The Packers’ first pick was especially puzzling. Gutekunst made Georgia’s Quay Walker the first linebacker off the board despite both Devin Lloyd and Nakobe Dean remaining available. The Packers later doubled down on Georgia defenders by selecting defensive tackle Devonte Wyatt.

Franchise quarterback Aaron Rodgers returned to the franchise on a long-term extension that should keep him in Green Bay for the remainder of his dwindling career. A trade that sent Davante Adams to the Las Vegas Raiders left Green Bay’s pass-catching corps rather thin. Gutekunst owns several Day 2 selections and several high-level receivers remain on the board, including Georgia’s George Pickens, Western Michigan’s Skyy Moore and North Dakota State’s Christian Watson. The Packers may still address their need at receiver in a rather acceptable fashion but their decision to not draft a receiver on Thursday lands them on this list.