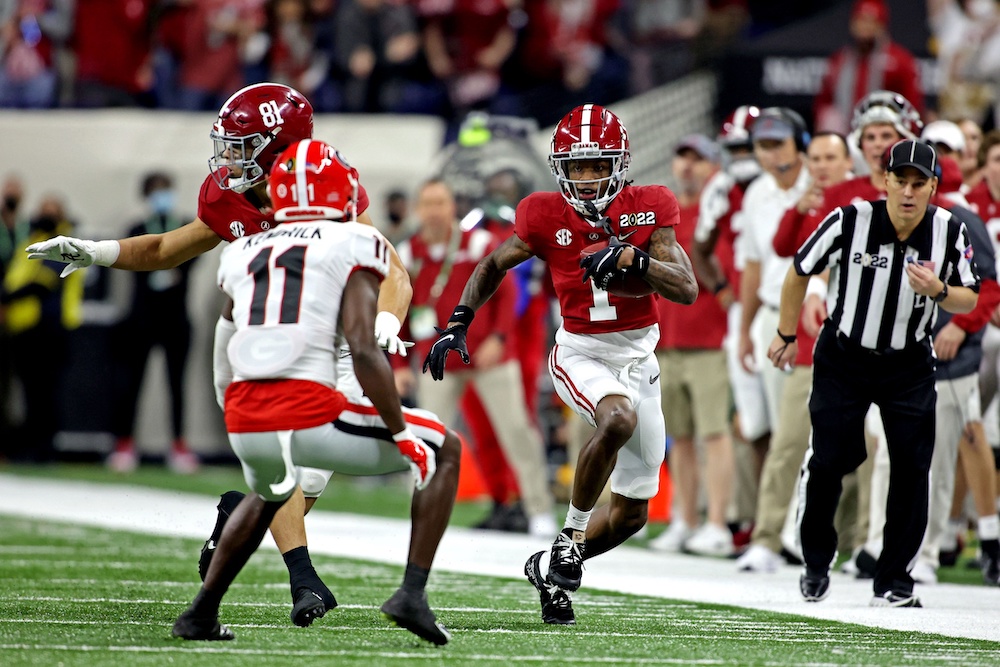 The 2022 NFL Draft class is another class full of talent at the wide receiver position. Ohio State’s duo of Garrett Wilson and Chris Olave stands out. So do others like USC’s Drake London and Alabama’s Jameson Williams. However, even with so much first-round talent at the position, we still may not see a receiver taken within this year’s first 10 picks.

That’s not too rare an occurrence, of course. Before last year’s draft saw three receivers—Ja’Marr Chase, Jaylen Waddle and DeVonta Smith—off the board in the top 10, you’d have to go back to 2017 to see even one receiver selected before the 11th pick. Coincidentally, that year also had three receivers go in the top 10: Corey Davis, Mike Williams and John Ross, but I digress.

Even so, with that many talented receivers in this year’s draft and in a league becoming more pass-heavy, it may seem hard to imagine any of that talent slipping out of the top 10. It’s even harder to picture considering several teams with early picks could use a wide receiver.

The Falcons, currently slated to select eighth, lost Calvin Ridley for the 2022 season due to suspension, and already needed some help out wide anyway. Tight end Kyle Pitts turned out to be a monster first-round pick for them last season as he finished with over 1,000 yards and earned a Pro Bowl nod. Helping out quarterback Marcus Mariota with another big-name offensive weapon drafted early could make sense.

Finally the Jets, who have the fourth and 10th overall picks, could really help out quarterback Zach Wilson by drafting some of that top receiver talent early. New York brought in Corey Davis—a top former 10 pick himself—last year and re-signed Braxton Berrios this year, but any receiver available at 10 would likely be a big upgrade.

There’s still no guarantee that any of those teams takes a wide receiver with those early picks though. However, that speaks more to the excess of talent there is at other premium positions than to a lack of talent at receiver.

Perhaps the position most stacked with talent in this 2022 draft class is edge rusher, already a premium position in itself. At the top of most teams’ draft boards for the position, you’ve (probably) got Michigan’s Aidan Hutchinson and Oregon’s Kayvon Thibodeaux. Right behind them is Georgia’s Travon Walker, who has skyrocketed up draft boards, and Florida State’s Jermaine Johnson II.

Other premium positions have some really skilled players too, with plenty of cornerbacks and offensive tackles worthy of going in the top 10.

One thing all teams selecting in the top 10 have in common is that they have several roster needs to address, otherwise they likely wouldn’t be picking so high. Also in common for many of those teams is their particular team needs by position.

Both New York teams—as well as Carolina—could use help on the offensive line, and every team picking in the top five would love a dynamic pass-rusher to build their defense around. In the back end of the top 10, the Falcons, Seahawks and Jets might all be in the market for a cornerback.

Though a wide receiver has been drafted in the top 10 in three of the last four mock drafts by members of our scouting team, it’s not a guarantee by any means. There’s a lot of talent at other premium positions that could end up boxing any receivers out of a top-10 selection.

That’s great news for teams outside the top 10 that may be hoping for one of the big names out wide. The Eagles, Saints, Packers and Patriots may all find themselves in a perfect position to draft one of the Ohio State receivers, Williams or London later on in the first round.

Right now, most sportsbooks have the over/under set around 5.5 on receivers drafted in the first round. Given the more pressing needs elsewhere for teams in the top 10 though, I’ll set the over/under for receivers taken that early at 0.5. It’s most likely that either the Jets pick a receiver with that 10th overall pick or there are no top-10 receivers at all.

We’ll get our answer on how many receivers are drafted early when the 2022 NFL Draft kicks off in just over a week.