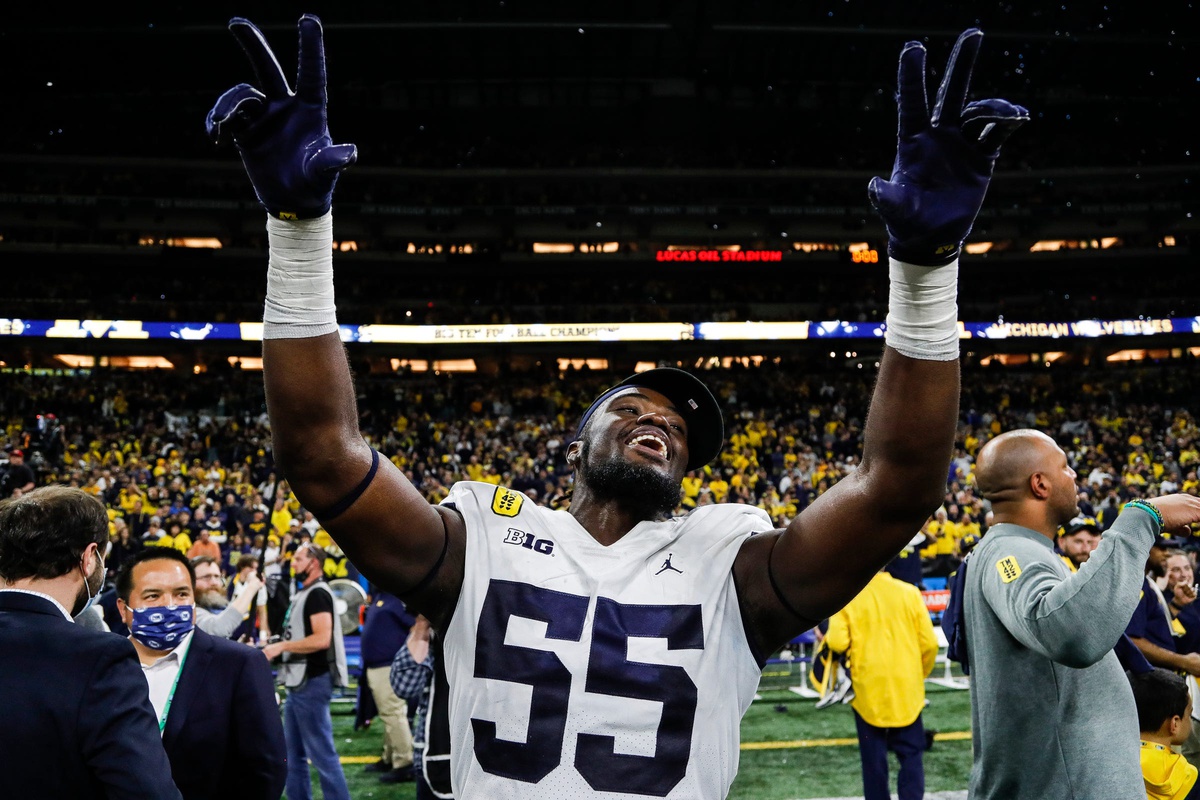 Not all of the players found new homes as early as we expected though. Many guys that we expected to go as early as the first round slipped into the second- and third-rounds, providing great value for the teams that eventually stopped their slides.

Here are the five biggest steals of the 73 players selected on the second day of this draft. Spoiler alert: the Ravens got two of them.

I mean… is there a team that’s had a better couple of days than the Baltimore Ravens?

On Thursday night, they got two of the best athletes not only at their respective positions but in the entire draft class in safety Kyle Hamilton and center Tyler Linderbaum. They passed on edge rusher Jermaine Johnson with their second first-round pick to draft the latter, but now we know that didn’t end up mattering.

Edge rusher David Ojabo is a freak athlete. He didn’t start playing football until late in high school but ended up at Michigan to continue his career and balled out. The lack of experience makes Ojabo a raw prospect, but he will be a monster edge rusher once given the time to develop as a football player at the next level. Baltimore is an incredible landing spot for him then. Not only do they have a need for an edge rusher but Ojabo can continue to develop under former Michigan Defensive Coordinator Mike Macdonald.

Ojabo wouldn’t have fallen this far without his Achilles tear at Michigan’s pro day. Our scouts gave him a high second-round valuation and he predictively could have been selected as high as the overall top 15 if not for that injury. Instead, Ojabo’s fall into the Ravens’ lap made the pass-rusher the third-straight fantastic addition to Baltimore’s roster.

Picture this: you’re an NFL general manager and you use your two first-round picks to upgrade your defense instead of taking the guy you like to immediately replace the dynamic wide receiver you traded away. In the second round, you trade back to get some extra draft capital, potentially giving up on drafting the receiver you wanted in the process. But when you’re back on the clock, against all odds, that same receiver—the one you thought about drafting as early as the first round—is still there.

That’s pretty much what happened with the Chiefs and wide receiver Skyy Moore.

Moore is an excellent route-runner that uses his agility and massive hands to get open only to then snatch the ball right out of the air. He’s relatively new to the position after schools recruited him as a defensive back and quarterback. Moore will now get the chance to develop in a high-volume passing offense that can also allow his versatility to shine.

Kansas City likely would’ve been happy to take Moore in the first round. Instead, they were patient, built up extra draft capital in the process and still got their guy later in the second round.

I will ask my question again. Is there a team this year having a better draft than the Baltimore Ravens?

In TDN scout Joe Marino’s words: “Travis Jones is a better prospect than Jordan Davis, and [the Ravens] got him two rounds later.”

Joe said it best during TDN’s coverage of the 2022 NFL Draft (make sure to check us out on YouTube and Twitter if you haven’t already) when he talked about Jones’ ability to attack the quarterback. Not only can Jones dominate in stopping the run but he also makes a real impact pressuring opposing quarterbacks from the A-gap.

Baltimore’s defense just gets scarier with each pick they make and the other 31 teams have got to stop letting them get incredible value with each selection.

There’s an argument to be made that Nakobe Dean was the best linebacker in the 2022 NFL Draft class. Due to a couple of potentially concerning medical issues, Dean not only fell out of the first round, he also dropped past the second.

Getting a linebacker with a football IQ as high as Dean’s in the third round, even with medical concerns, is well worth the investment. The Eagles knew that and took advantage of the opportunity to draft him when he slipped down the board to the 83rd overall pick.

The Georgia product has true three-down value with his abilities in pass coverage on top of his lateral mobility and skills as a tackler. Getting that kind of talent this late in the draft is a total steal.

Philadelphia also has the added advantage of pairing Dean with college teammate and fellow dominant defender Jordan Davis in their defensive front. The linebacker thrived when he played behind a strong defensive line at Georgia and now he’ll get to play behind both Fletcher Cox and Davis (again).

When we look back at the linebackers drafted ahead of Dean in this draft class, I have a feeling many of the teams that passed on the Georgia product will be wishing they could have a do-over.

Liberty quarterback Malik Willis felt like a player who was a lock for a first-round selection in the 2022 NFL Draft. He’s the signal-caller with the highest ceiling in the class and if he plays up to that potential could be one of the best quarterbacks in the NFL.

Clearly Willis’ low floor was enough to scare off teams to the point that he fell all the way to the third round. Eventually, the Titans had seen enough and traded up to end his slide.

After several years with Ryan Tannehill, a quarterback who’s more of a game manager than a guy who can take over a game, the Titans get a super dynamic, dual-threat gunslinger to be their next franchise quarterback.

Tennessee got a great value for Willis too as a third-round pick, and they were able to bring in a new quarterback after building for his future with a new receiver and offensive tackle in previous picks. They’ve got to be super happy with this pick this late, especially considering our own Justin Melo had the Titans as a sneaky team who might even have traded up in the first round to grab a quarterback.

Tennessee is a very nice landing spot for a raw talent like Willis that could use the time to develop. He can sit behind Tannehill for a year and learn a pro system in Nashville before stepping into the starting role in 2023.