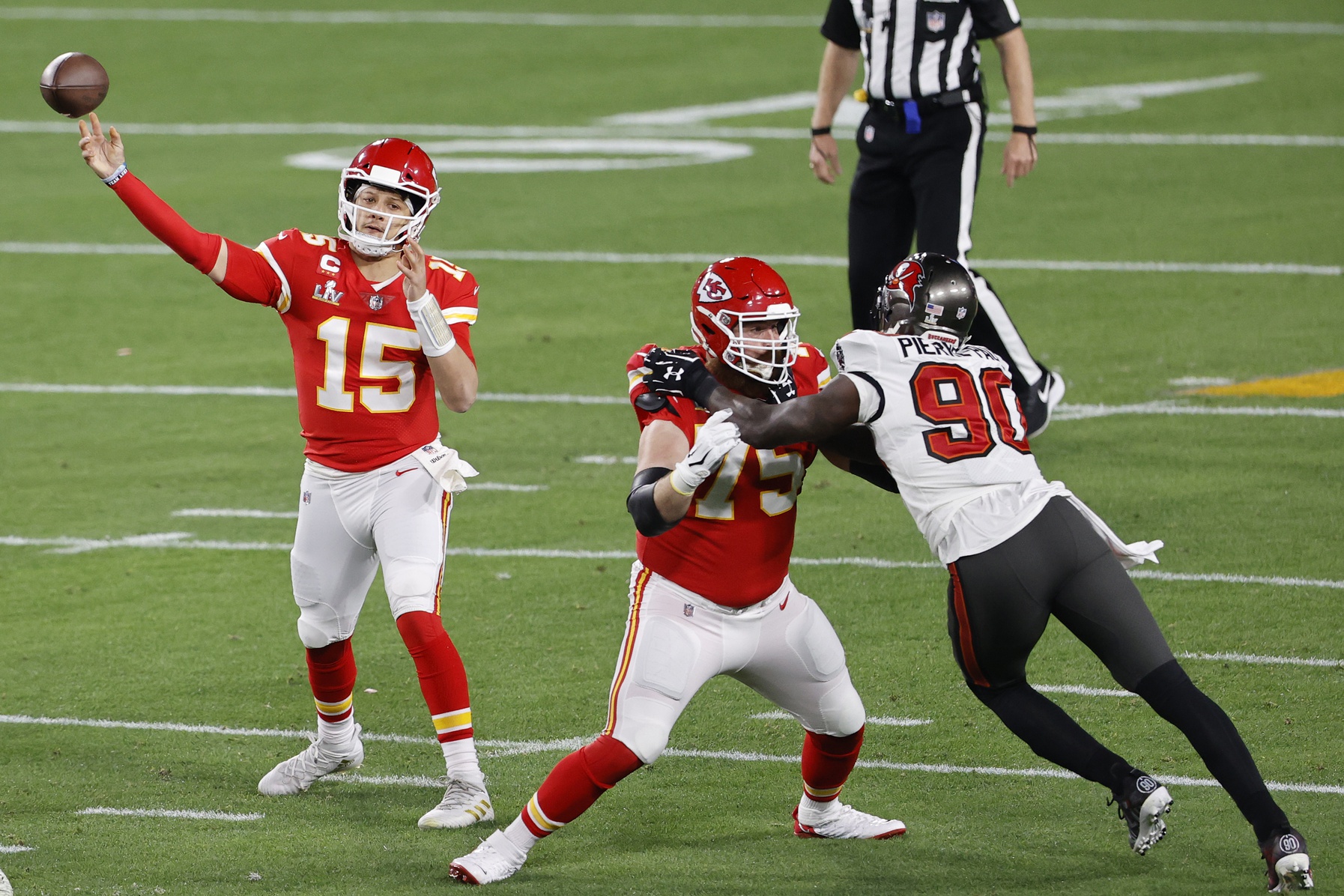 Happy offseason! This is one of the best times of the year for football writers like myself. Now that one NFL season has just ended, we can already start looking ahead and making some way-too-early picks for the next. For one thing, it’s a fun exercise to do now, so that at the NFL Honors show in 2023, we can all look back and see how I was totally right about all of these picks. For another, you all can’t flame me too hard for these picks if they somehow do end up wrong because, well, they’re my way-too-early takes! Without any further introduction, here are the players I’m expecting to see on stage at next year’s NFL awards show.

With Tom Brady out of the league and Aaron Rodgers potentially moving to a new team, Mahomes is the safest bet here. In fact, he’s currently tied with Rodgers as betting favorites to win the 2022 MVP award. What Mahomes can do with the ball in his hand in any given game at any given moment, as well as the offensive output he produces, makes him hard to bet against. He may have had a shaky start to the 2021 season with too many turnovers in close games, but I don’t expect that will be the case again in 2022. What’s more likely is that Mahomes and the Chiefs bounce back from their AFC Championship loss and put together a strong 2022 campaign. The fifth-year starter will return to his early-season form with no picks in September and ride that momentum to high production and his second MVP award.

There have never been two consecutive years with a wide receiver winning an Offensive Player of the Year award. It’s an honor that more often than not is awarded to a quarterback or running back. That being said, Taylor is my choice here. Derrick Henry could have a great season returning to a full workload after his foot injury, but he didn’t put up huge numbers in the Titans’ divisional round matchup with the Bengals. Meanwhile, Taylor proved his ability to be one of the league’s best workhorse backs, and for what it’s worth (nothing), he was my vote for this year’s OPOY. He led the league in rushing/receiving touchdowns and all-purpose yards in 2021, and I expect he’ll get a lot of touches and make the most of them again in 2022.

Considering the fact that Donald has won three of the last five Defensive Player of the Year awards and was in the top three in voting this year, it would be hard not to pick him here. Donald has been a game-wrecking monster since he entered the NFL in 2014. He’s earned first-team All-Pro honors every year since his second season and has been named to the Pro Bowl every year he’s been in the league. No one on any offensive line has been able to stop Donald in the trenches, and we saw just what he could do on football’s biggest stage against one of the NFL’s worst offensive lines. Now, while I don’t fully buy into any retirement rumors until the player announces it himself, there was speculation that Donald could retire after this season if he won a ring. If Donald does retire, it’s Parsons who takes home this award. The Cowboys rookie won this year’s Defensive Rookie of the Year award and finished second in voting for Defensive Player of the Year. If T.J. Watt didn’t tie the single-season sack record this year, Parsons may have been the first rookie since Lawrence Taylor to win both DROY and DPOY. In 2021, he tallied 13 sacks (0.5 more than Donald) and was one additional tackle for a loss away from tying Nick Bosa and Watt for first in the NFL. Parsons, like Donald, was a defensive monster this season, and I expect he’ll continue dominating in 2022.

This pick is hard to be too sure about. We obviously don’t know where any of next year’s rookies will get drafted, and there’s a wide range of playing time rookie quarterbacks might see, depending on where they end up. Some might be day-one starters, others might ride it out on the bench their rookie year. With that in mind, I still feel pretty decent about going with Pickett here. The Pitt product had one of the greatest seasons in ACC history with a 42:7 touchdown-to-interception ratio, 67.2% completion rate, and 4,319 passing yards in 2021. Pickett will likely be the first or second quarterback off the board in this year’s draft, so while he may not be a day-one starter, he should see the field for a good portion of the season. When he does, I expect he’ll impress.

This pick has fewer factors to consider than its offensive counterpart. That’s because Thibodeaux is probably going to dominate no matter where he ends up. The Oregon star finished with seven sacks across 10 games this past season. He’s dominant in both rushing the pass and defending the run. As it stands now, he’s our scouts’ No. 1-ranked player on the TDN 100 big board. Thibodeaux’s game-wrecking force at the college level is a result of his raw athletic ability and power. Those two factors combined should translate well to the professional level, so Thibodeaux will be a dominant defender in his rookie year and beyond.

While I really wanted to give this one to Derrick Henry, the Titans running back technically already came back, returning to action in the divisional round of the playoffs. Otherwise, this is another hard award to predict, since we never really know how or if a player will bounce back from either poor previous seasons or an injury. Thomas is a pretty safe bet here though. If he returns to even half the level of production he had before his injury, he’d still be one of the league’s best receivers. Thomas led the NFL in receptions in 2018 and 2019, earning Pro Bowl and first-team All-Pro nods in both seasons and winning Offensive Player of the Year in 2019. Whether he returns to the Saints or not remains to be seen, since the team is currently in cap hell and may need to cut ties with Thomas to save money. Wherever he ends up, he’s likely to have a solid year in his return.

This is another one of those awards that’s pretty difficult to predict, since a lot of it depends on what challenges a team might face during the season. For instance, this year’s winner, Titans head coach Mike Vrabel, coached his team to the AFC’s top seed despite losing their MVP, Henry, in the middle of the season. Tomlin is my choice here since he already faces a challenge heading into 2022. For the first time since he took over as the Steelers’ head coach in 2007, Pittsburgh won’t have established veteran quarterback Ben Roethlisberger on the roster. Tomlin has also never had a losing season in his 15 years at the helm. If he can put together another winning season—and especially if he pulls the Steelers to the playoffs—without a defined franchise quarterback, that could absolutely be enough to earn him his second Coach of the Year award.